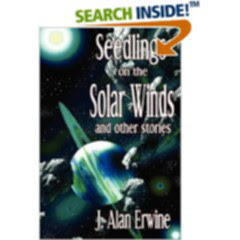 Seedlings on the Solar Winds
by J Alan Erwine
Paperback: 148 pages
Publisher: Nomadic Delirium Press (December 22, 2007)
Language: English
ISBN-10: 0980170303
ISBN-13: 978-0980170306
Buy it at Amazon or Nomadic Delirium Press.
J Alan Erwine's "Seedlings on a Solar Wind" is a small book, but loaded with good stories.
I've enjoyed reading all of them. I like short stories. I like the fast setup and the slamming resolution. J's stories fulfill my desire for the quick, fast, slap you in the face plots.
Seedlings has some downsides, but they're not severe. I noticed a few typos here and there. Well, what can I say? I'm a long-time tech writer and typos tend to show on the page in neon to my eye. I've seen them in the high-paid authors books, so I'll not mark J down on that account.
Favorites? "A Chronic Mistake," although J admits he doesn't write much cyberpunk, he might consider doing more. The story kept me going to the end. I didn't think I was much of a cyberpunk fan, but it then occurred to me that Dhalgren by Samuel R. Delaney is one of my favorite books of all time. Is it cyberpunk? I think so, maybe, sort of. Maybe it's pre-cyberpunk. Coming out in 1975, there was hardly any cyber with which to punk anyway. I also really liked Snow Crash by Neal Stephensen, and that's cyberpunk for sure. So maybe I'm more of a cyberpunk fan than I thought.
I think the book is worth the price. I hope everybody will also take a look at J's novels. I'm money-challenged, so I've got to spend wisely, but I sure would include J's books in my "want" list.
2 comments:

Need a Good Book to Read?

Rather than the usual 100 best books, decided by somebody who probably doesn't have your taste in reading, how about a list of books that created the most controversy from 1990-2000? Yup, here's the horrendous books that some benighted soul decided should be tossed on a pile and burned. Well, maybe not quite that bad, but...

From the ACLU Website - 100 Most Frequently Challenged Books. Also, check the site for additional information on the types of challengers, initiators, etc. Omigosh! Maya Angelou, Mark Twain, J.K. Rowling, Judy Blume, and those are just in the Top 10.

1. Scary Stories (Series) by Alvin Schwartz
2. Daddy's Roommate by Michael Willhoite
3. I Know Why the Caged Bird Sings by Maya Angelou
4. The Chocolate War by Robert Cormier
5. The Adventures of Huckleberry Finn by Mark Twain
6. Of Mice and Men by John Steinbeck
7. Harry Potter (Series) by J.K. Rowling
8. Forever by Judy Blume
9. Bridge to Terabithia by Katherine Paterson
10. Alice (Series) by Phyllis Reynolds Naylor
11. Heather Has Two Mommies by Leslea Newman
12. My Brother Sam is Dead by James Lincoln Collier and Christopher Collier
13. The Catcher in the Rye by J.D. Salinger
14. The Giver by Lois Lowry
15. It's Perfectly Normal by Robie Harris
16. Goosebumps (Series) by R.L. Stine
17. A Day No Pigs Would Die by Robert Newton Peck
18. The Color Purple by Alice Walker
19. Sex by Madonna
20. Earth's Children (Series) by Jean M. Auel
21. The Great Gilly Hopkins by Katherine Paterson
22. A Wrinkle in Time by Madeleine L'Engle
23. Go Ask Alice by Anonymous
24. Fallen Angels by Walter Dean Myers
25. In the Night Kitchen by Maurice Sendak
26. The Stupids (Series) by Harry Allard
27. The Witches by Roald Dahl
28. The New Joy of Gay Sex by Charles Silverstein
29. Anastasia Krupnik (Series) by Lois Lowry
30. The Goats by Brock Cole
31. Kaffir Boy by Mark Mathabane
32. Blubber by Judy Blume
33. Killing Mr. Griffin by Lois Duncan
34. Halloween ABC by Eve Merriam
35. We All Fall Down by Robert Cormier
36. Final Exit by Derek Humphry
37. The Handmaid's Tale by Margaret Atwood
38. Julie of the Wolves by Jean Craighead George
39. The Bluest Eye by Toni Morrison
40. What's Happening to my Body? Book for Girls: A Growing-Up Guide for Parents & Daughters by Lynda Madaras
41. To Kill a Mockingbird by Harper Lee
42. Beloved by Toni Morrison
43. The Outsiders by S.E. Hinton
44. The Pigman by Paul Zindel
45. Bumps in the Night by Harry Allard
46. Deenie by Judy Blume
47. Flowers for Algernon by Daniel Keyes
48. Annie on my Mind by Nancy Garden
49. The Boy Who Lost His Face by Louis Sachar
50. Cross Your Fingers, Spit in Your Hat by Alvin Schwartz
51. A Light in the Attic by Shel Silverstein
52. Brave New World by Aldous Huxley
53. Sleeping Beauty Trilogy by A.N. Roquelaure (Anne Rice)
54. Asking About Sex and Growing Up by Joanna Cole
55. Cujo by Stephen King
56. James and the Giant Peach by Roald Dahl
57. The Anarchist Cookbook by William Powell
58. Boys and Sex by Wardell Pomeroy
59. Ordinary People by Judith Guest
60. American Psycho by Bret Easton Ellis
61. What's Happening to my Body? Book for Boys: A Growing-Up Guide for Parents & Sons by Lynda Madaras
62. Are You There, God? It's Me, Margaret by Judy Blume
63. Crazy Lady by Jane Conly
64. Athletic Shorts by Chris Crutcher
65. Fade by Robert Cormier
66. Guess What? by Mem Fox
67. The House of Spirits by Isabel Allende
68. The Face on the Milk Carton by Caroline Cooney
69. Slaughterhouse-Five by Kurt Vonnegut
70. Lord of the Flies by William Golding
71. Native Son by Richard Wright
72. Women on Top: How Real Life Has Changed Women's Fantasies by Nancy Friday
73. Curses, Hexes and Spells by Daniel Cohen
74. Jack by A.M. Homes
75. Bless Me, Ultima by Rudolfo A. Anaya
76. Where Did I Come From? by Peter Mayle
77. Carrie by Stephen King
78. Tiger Eyes by Judy Blume
79. On My Honor by Marion Dane Bauer
80. Arizona Kid by Ron Koertge
81. Family Secrets by Norma Klein
82. Mommy Laid An Egg by Babette Cole
83. The Dead Zone by Stephen King
84. The Adventures of Tom Sawyer by Mark Twain
85. Song of Solomon by Toni Morrison
86. Always Running by Luis Rodriguez
87. Private Parts by Howard Stern
88. Where's Waldo? by Martin Hanford
89. Summer of My German Soldier by Bette Greene
90. Little Black Sambo by Helen Bannerman
91. Pillars of the Earth by Ken Follett
92. Running Loose by Chris Crutcher
93. Sex Education by Jenny Davis
94. The Drowning of Stephen Jones by Bette Greene
95. Girls and Sex by Wardell Pomeroy
96. How to Eat Fried Worms by Thomas Rockwell
97. View from the Cherry Tree by Willo Davis Roberts
98. The Headless Cupid by Zilpha Keatley Snyder
99. The Terrorist by Caroline Cooney
100. Jump Ship to Freedom by James Lincoln Collier and Christopher Collier
3 comments:

I've been working my butt off on finishing up the Bad Spelling edit. The end is near. No, that doesn't sound very good, does it? Although I can still read parts of the book and get a giggle or two, fretting over the first few chapters is enough to turn one's hair gray. Hence, my appointment with Lady Clairol last weekend.

Pearls Before Swine is an oddball comic strip you might know. Today's strip definitely describes me at this point in the process. Hard to read here, so here's the link to the daily strip.

Things sure are dull around here

My fault, I know. Mea culpa and all that. I've been busy (that's my excuse and I'm sticking to it). I'm going through the edit phase on a new book. Part of the process is writing a spiffy query letter. For the uninitiated in the arcane rites of trying to get an agent, a query letter has to be short and attention grabbing. The first paragraph is supposed to contain a reason why the particular agent is the best choice for your book. That part is personalized, obviously, every time you send a query. The almost last paragraph contains relevant publishing credits. So, if I had a tome published on using database software (which I have), there's no reason to include it in a query for a middle-grade fantasy.

This particular query has not gone out to any agents (I'm still editing the book, right?), so I'm completely open to anybody's thoughts on changes to it.

(things personalized about agent) I believe you might be interested in BAD SPELLING, a completed 40,000 word MG/YA fantasy novel about a girl witch who can’t spell right.

Katya lives on the polar island of Galdurheim, a haven settled by European witches in the bad old days of the medievel witch hunts. Every spell Katya tries backfires on her. While she would like nothing better than to be a good witch and a credit to her race, her half-human parentage has put a kink in her abilities. Her brother, Rune is only half Warlock, with a vampire father, but he’s a super speller and everybody, especially picky Aunt Thordis, thinks he’s wonderful.

Another village witch discovers that a shaman from Katya’s Siberian family had cast a protective spell around her dead father’s body, unreachable since it is suspended inside a glacier. The protective spell not only puts a damper on Katya’s magic, but is spreading to the village. Katya knows she must do something fast, before the spell dooms the village’s existence. She decides she must find her father’s family and stop the witch-hating, spell-casting Shaman.

She and Rune race across the polar ice seas, fighting off polar bears, giants, trolls, and werewolves, not to mention that nasty shaman. In the end, Katya finds her Siberian family, defeats the shaman with help from an unusual source, gets her first kiss, and finally realizes she just might be a good speller after all.

I have published over thirty-five stories in a variety of print and on-line publications. My short stories have appeared in Weirdly (Wild Child Publishing), Wondrous Web Worlds 7 (Sam’s Dot Publishing Best of anthology), and A Time To... (Eppie finalist Best of anthology from Lorelei Signal). Sam’s Dot Publishing has scheduled two of my novellas for publication this summer: The Seven Adventures of Cadida (middle-grade fantasy) and First Duty (YA science fiction).

Thank you for your consideration and I hope you’ll want to see more.