This was an excellent year for writing production. Not so great for acceptances. Thing is, I changed my focus from short stories to books. Much slower to sell (or next to impossible).

I only have one published short story (well, almost published). It will be on the Stories for Children website in January. Titled "Lemons."

I did hear from J that Wondrous Web Worlds 8 is being put together. My story, "Final Exam," will be included in the anthology. Originally published in The Fifth Di... I took this story and another with the same main character and expanded it into a book titled "First Duty" which was published by Sam's Dot Publishing in June. It's available at The Genre Mall.

Also from Sam's Dot, my Aladdinesque tales of a girl and her genie is just about to hit the streets. Titled "The Seven Adventures of Cadida," it will be available soon from The Genre Mall. Link coming soon. The first two stories are available as chapbooks at The Genre Mall.

Otherwise, I sent a ton of queries to agents for the first two books in a series I'm writing. The series is titled "The Witches of Galdorheim." Book 1: Bad Spelling and Book 2: Midnight Oil. I have a couple of fulls out to agents and crossing fingers to get some positive responses.

And, I'm shopping another YA fantasy titled "Quest for the Simurgh" to publishers. Slow going to get responses from publishers. All I can do is twiddle thumbs and wait.

The upshot? Lots of words written, reviewed, and edited. Very few submissions accepted. Maybe I should go back to short stories. I sold a lot of those.

Tis the season, as they say. Season for what?

Christmas: A conversion of the mid-winter Saturnalia Festival. St. Patrick was big on keeping the frolicking holidays, but bending them to his own purpose. Historical records seem to place the actual birth of Jesus in March or April.

Hanakkuh: Festival of Lights for those of the Judaic persuasion. Probably irritated by the Christians trying to usurp this general time period. The Jews should really try to keep their holiday separate from Christmas, so as to not besmirch their own observance. Anyone want a hanakkuh bush?

Kwanzaa: Created in 1966, Kwanzaa was made up by a California guy to highlight African-American culture. Cool thought, but I'd just as soon we'd say: "What? Obama is black? Wow, I didn't know that." Keeping separate ensures separateness.

Eid ul-Adha: This is the Moslem day of celebration of Abraham not killing his son. Well, he would have killed his son, but God said intent was okay. This Moslem day is celebrated anywhere from late October to January. I think it's December 8th in 2008, so we missed it.

So, whatever you celebrate around this time of year, enjoy, be happy, don't drink too much.
No comments:

Email ThisBlogThis!Share to TwitterShare to FacebookShare to Pinterest
Labels: Holidays

Review: Glory Rose and the Gloaming 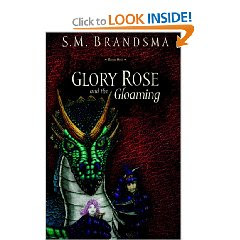 Glory Rose and the Gloaming
by S.M. Brandsma
275 pages
Available at Amazon
This is a very enjoyable first installment in a series about the adventures of a half-fairy girl, Glory Rose.
Set in the magical time when the young Arthur is not yet King, Brandsma deftly weaves in myth and folklore in what she calls the Ensorcelled Realm. Some of the standard mythological characters live up to their advertising: trolls and stupid and ugly, and fairies are as you would expect them to be. Brandsma takes off from the old tales to make giants and dragons good guys, which pleases me no end. So, don’t expect the same old tired magical creatures. Brandsma wisely varied from the trite retelling.
The villain, a creature of hell, is not a myth I recognize. I love when I find something in a myth-based fantasy, taken from well off the beaten path. Bassarab (or Basarab) turns out to be the family name of a certain Vlad Draculea. I’m a fan of Vlad and I missed this dynasty name in my own research. Kudos to Brandsma for mixing things up a little more.
As for writing, Glory Rose is an easy read for its young adult target audience. I believe that kids as young as ten will love the stories, the many great personalities, and the action revolving around Glory’s role as the Chosen One.
Brandsma is also an adept artist and the clever line drawings at the beginning of each chapter are a delight.
I’m looking forward to "Glory Rose and the Book of Shadows." The first chapter of the second book in the series is excerpted at the end of "Glory Rose and the Gloaming."
One last thought. Gloaming is not a familiar word and, while it is explained in the book, it doesn’t give any immediate wow factor when searching for something to read. Fortunately, Brandsma’s cover art dragon takes care of that.
No comments:

HarperCollins started a website for authors and wannabe authors to review books and upload parts of their own books for review.

Join for free and read and review published and unpublished works. There's an off-chance that your unpublished work might even be reviewed by a HarperCollins editor. How's that for an enticement?

I uploaded a few of the stories from "Tales of a Texas Boy" (available at Amazon). Drop by to read a bit and vote for me.