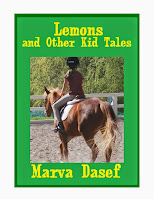 Lemons and Other Kid Tales - 3 short stories for kids

Lemons: Karen is horse crazy. One day, everything seems to go wrong.

One Fine Dog: Dogs weren't just pets, but working members of the family. Some, they could do amazing things and perform feats almost like magic.

Practical Cat: Boots wanted to explore outside, but finds out there's no place like home.

When Kameron McBride receives notice she’s the last living relative of a missing man she’s never even heard of, the last thing she wants to do is head to some half-baked Oregon town to settle his affairs. 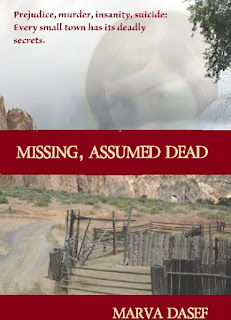 The End of Freebie February

February is the Free-est Month

February is a short month with only 28 days to cause trouble, watch for groundhog shadows, admire Presidents, find someone to show your love with pretty flowers or fattening chocolates, and wish the State of Oregon a resounding Happy Birthday. And it's also the anniversary...oops, not this year. My hubs and I got married on February 29th, so this is a non-count year. Let's just say we're starting the fifth decade of not killing each other. A definite achievement.

Since so much is happening in such a short month, I have to give gifts. These gifts will cost you nothing and, best of all, cost me nothing. That's write it's a good time to hand out ebooks.

Here's what's coming up in February. Forewarned, you can be all about getting the free stuff. The titles and background color shows which days which ebooks will be #free on Amazon. Note that "Missing, Assumed Dead" is free only on each Sunday of the month. The audio edition of "Missing, Assumed Dead" will be on sale when you get the ebook. I don't know how much of a sale, but Amazon usually knocks off half or more of the normal audiobook price. 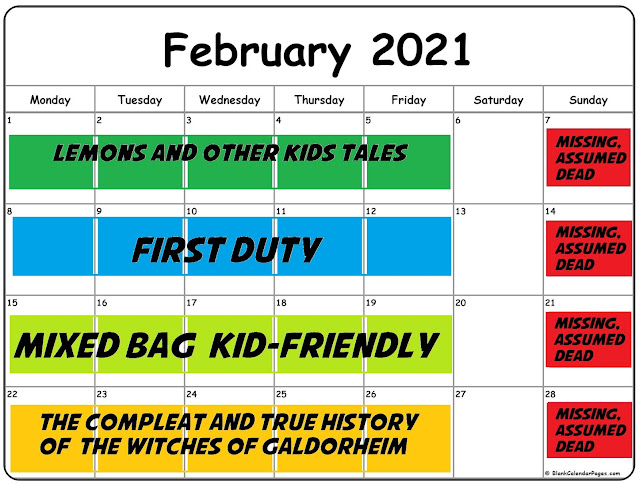 Included in my short story collection, Mixed Bag: Supersized, this tale is set in the far future when new colonies were sought out for the overflow of earth's population. Check it out on Amazon. Or just read my other stories on Wattpad. Oh, and the entire book is free this week. Jan 19-23.

No Deposit, No Return

If You Could See Her

Ma ‛Yote and Her Cubs

A Visit to Potter’s Field

A Grab Bag of Drabbles

The Audio Book of "Tales of Abu Nuwas 2: Faizah's Destiny" is available on Audible, Amazon, and iTunes.

Book on Audible.com - Start your free trial of audible and get this book free. Also, get a free promo code by asking me in a DM or email.
UK link on Audible. Promo codes available for UK as well.
Book on Amazon along with the ebook and print editions. Audio book on sale for $7.49.
Book on iTunes - worst deal, unless you have a subscription to iTunes. Do they do that?

Audio Book Sample
About the Book 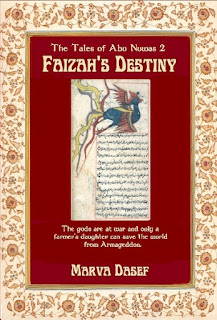 The gods are at war, and only a farmer’s daughter can save the world from Armageddon.
The village magician has gone missing. His four pupils think he has left a clue to his whereabouts in the Magicalis Bestialis, the book of magical creatures. They must seek the help of the elusive Simurgh, the mythical bird who know all the secrets of the universe.

Faizah, a farmer’s daughter, is chosen to lead the humans in the battle. She must persuade a slave, an orphan, and a rich merchant’s son to join in the battle on the side of good.

Although divided by Dev, the evil god of war, the teens must band together to find the Simurgh, rescue their teacher, and stave off Armageddon.