For those who bought the Kindle edition of First Duty (only 99 cents), I give my deepest thanks.
For those of you who want a print edition instead, I ask, "Well, what's stopping you?"
Just a reminder that the snazzy print edition of First Duty is available on Amazon. Toss it in your cart to make up the $25 minimum for free shipping when you buy something else.
Just click this link, then click Buy. It's really easy! I need the ranking!
As an incentive, I'll give you 50% off the cover price. Send me a copy of your receipt from Amazon and your PayPal email address and I'll send you $4.00. Think of it as an electronic rebate form.
1 comment: The Sorcerer's Key
by Clayton Bye
Buy the book in either:
Print or
Ebook

Also available through Amazon and other on-line stores.

Jack Lightfoot's parents were on the run from their homeworld of Eden. The nasty sorcerer, Morgan, wanted what the Lightfoot family had: the ability to cross over into Earth to take advantage of the technology that Earth has, something that Eden does not.

When Morgan finds a way to send an assassin after the Lightfoot family to find the key to opening the door between worlds, Jack is thrown into a battle between sorcerers. Only problem is, Jack has lived on Earth his entire life and all the magic he knows is entirely theoretical.

With only the training his father has given him, Jack has to jump worlds and learn to use his magic ... fast. Morgan is out to kill Jack for the key to move between worlds.

The Sorcerer's Key is a fast action tale of magic and action. It's fast moving from the first page onward. I knew I'd like this book from the beginning.

It's modern, rather than medieval, setting makes Jack a young man who might be the teenager down the street. Very modern Jack has to cope with the 19th C. non-technological, yet highly magical, world of Eden.

Clayton Bye's writing is smooth and exciting. He keeps the reader on their toes, or at least propped up in bed reading into the wee hours.

I'd definitely recommend this book for all fantasy fans.

Rating: ***** for fantasy action and goodness.
No comments:

Here's the link to the print edition. At this time, it just has the product page holder, but you can tag, add reviews, and sign up to be notified when the book is available.
Click here to revel in the glory of my Amazon product page. ;) 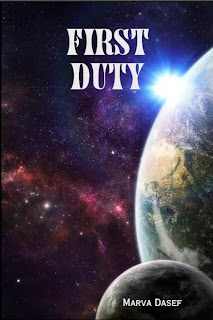 I recently got back my rights to "First Duty." Rather than re-up for additional print-only from my publisher, I chose to publish this YA space opera on my own. It's now available on Kindle for only .99. Did you know you can get the Kindle reader for PC for free? If not, then avail yourself of the opportunity and buy my YA scifi, First Duty. If you've been considering getting an e-reader, price wars are on! A refurbished Kindle reader can now be purchased for a mere $139.
First Duty
Nyra Hutchings, a young woman born into a life of servitude on a repressive factory planet, is desperate for a different life. When she's accepted into the Space Service Academy, run by the organization that enslaves her planet, she discovers the truth behind generations of rebellion. Now, she must decide what to believe, where her first duty lies, and fight for more than her life against impossible odds.
Thanks!
No comments:

Responses from Publishers and Agents

Just change "Replies" for "Suggestions" and you've got it. I also wouldn't mind any negative feedback. At least it wouldn't be just a form response.
No comments:

Finally! The YA science fiction saga of Nyra Hutchings, a woman torn between family and duty, is now available as an ebook. It's on Smashwords in a variety of e-formats. Kindle setup is complete and in the last stages of Amazon approval. The print edition is working its way through the system. I've ordered copies from CreateSpace so I'll have them for:
Art and the Vineyard, July 2-4. I'll be at the Author Table on 7/4 between 11:30 and 5:30.
Print is already available at CreateSpace. I'm going to make one last little change to the copyright page. I want to make sure proper credit is given for the portion of space I'm using created by Burning Liquid at Deviant Art. Very cool space art available for screen savers. I'm using the art under Creative Commons licensing. I sure hope I'm doing it right (credits and website applied) since I have no intention of stepping on anybody's copyright. If I'm out of line :( I'll have to find new cover art. I hope I'm good with my credits because I LOVE the cover!
NOTE: The adult version of First Duty, Ultimate Duty, will be released from Eternal Press in the near future.
No comments: 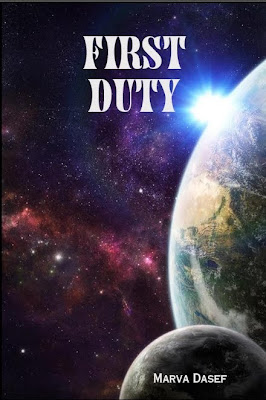 When you write, you've got a picture in your mind for your characters. It's fun to find something on the Internet to match, give your people a face. I've found that hunting down look-alikes isn't easy when your MC is not a gorgeous person. She's so-so in looks. Attractive, but not signing up for Top Model. For my latest book, I found lots of good stuff for my other characters. I have a folder full of physical scenes and bad-ass other characters.

My MC? Not so easy to find a 30-something, shoulder-length brown haired woman with hazel eyes who thinks she looks like a tall lawn gnome.

Why do the MCs have to be knock-out gorgeous. No, I don't subscribe to the theory that putting your hair in a bun and wearing glasses can make the heroine homely until she lets down that hair and takes off the horn-rims. 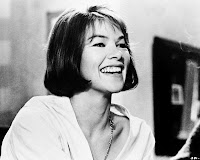 As I shopped Google images for somebody who looks like the person I had in mind, it struck me (whap!) that she looked like Glenda Jackson as a young woman. If you don't know Glenda, then hie thee to Google and educate yourself. She exudes strength and confidence. She played Elizabeth R with a semi-bald head and it worked.
Meet Kameron McBride, my not-so-gorgeous, but seriously intelligent and wonderful MC. Okay, so I look just a teensy bit like Glenda Jackson.
She's got that inner Right Stuff that makes her beautiful. So, my MC officially looks like Glenda Jackson. So there.
No comments:

Email ThisBlogThis!Share to TwitterShare to FacebookShare to Pinterest
Labels: Work in Progress

Giving out free ebooks is a popular means of engendering notice. If somebody gets a freebie, they'll read it and write a review, right? I'm not so sure that the postulate is true. Sometimes, the author just gives away a free book and the recipient is never heard from again.
Nevertheless, Let me give it a shot. Comment here (on my blog) or on Facebook or the other places my blog shows up and I'll do some sort of magical selection process and give away a book or two.
I'll offer up the ebook flavor of your choice on any of my three ebooks. Whatever way you have to read ebooks, I'll provide it.
So, post away and let me know which book you have a yen to read for free. I'll have my cat, Dusty, place his paw upon the winning entries as my method of random selection.
Tales of a Texas Boy: Little Eddie tells some almost true Tall Tales set in West Texas of the 1930s. Guess what's true and what Eddie fudged on. Was it about the bear? Cage McNatt's prize sow? The skunk in the cornpatch? Guaranteed for a chuckle.
Quest for the Simurgh: When the village magician goes missing, his students set out on a dangerous trip into the mountains and run into a big trouble from demons and gods set for a war to end the world.
Eagle Quest: Take four teens, an old Ranger, and a couple of eagle feather poachers. What have you got? Adventure! Set in the Klamath Wildlife Preserves of southern Oregon.
5 comments:

Email ThisBlogThis!Share to TwitterShare to FacebookShare to Pinterest
Labels: Humor

I'm the guest today on Dianne Salerni's terrific blog, In High Spirits. Dianne's book, We Hear the Dead, was recently released through Sourcebooks. This talented teacher and author is going places (did a spirit hear the word Script?).

NOTE: Misspelled Dianne's last name! Shame on me. Corrected at 10:25 AM.
No comments:

Email ThisBlogThis!Share to TwitterShare to FacebookShare to Pinterest
Labels: Dianne K. Salerni, Myths and Legends, We Hear the Dead

Exciting news! For me, anyhow. Eternal Press accepted for publication my science fiction novel with romantic elements (and some relatively hot sex scenes.

A couple of my writer friends are with Eternal Press, and I consulted them before submitting. EP was recently purchased by Kim Richards, the publisher of Damnation Press (for the dark side of SF/F/H). She's working at digging EP out of a publicity hole dug by the former owner. I certainly hope Kim works hard on making DP and EP top of the line epublishers. Oh, and print, too!

Remy Belieux, a woman born into a life of servitude on a repressive factory planet, is desperate for a different life. When she's accepted into the Space Service Academy, run by the organization that enslaves her planet, she discovers the truth behind generations of rebellion. Now, she must decide what to believe, where her ultimate duty lies, and fight for more than her life against impossible odds
4 comments: