Spotlight on ---- War and Conflict

Dianne Salerni, author of "High Spirits: A Tales of Ghostly Rapping and Romance," has collected another great Spotlight book page on her website. This month features books on War and Conflict.

Check out the books and links at Spotlight on Books.

Great historical books covering everything from the Revolutionary War, to the Civil War, and on.

The link is always the same, although the Spotlight topic changes monthly. Dianne archives all past Spotlight pages so you can browse for your favorite genres.
No comments:

Jeffery Lloyd Castle - a two-book wonder. Rummaging thru my bookshelves for something to read (other than tons of ebook and on-line great stuff), I found a copy of "Vanguard to Venus" by Castle. It's a book of the month club hardback. Published 1957. Cool, methinks, the Golden Age or at least close to it. Here is the backcover copy:

LIFE Magazine says there are more than TWO MILLION science fiction fans in this country. From all corners of the nation comes the resounding proof that science fiction has established itself as an exciting and imaginative NEW FORM OF LITERATURE that is attracting literally tens of thousands of new readers every year!
Why? Because no other form of fiction can provide you with such thrilling and unprecedented adventures! No other form of fiction can take you on an eerie trip to Mars . . . amaze you with a journey into the year 3000 A.D. ... or sweep you into the fabulous realms of unexplored Space! Yes, it's no wonder that this exciting new form of imaginative literature has captivated the largest group of fascinated new readers in the United States today!

From the jacket flap:

There is an accuracy and integrity about the writing of Jeffery Castle which distinguish his work from the FREAKISH IMAGININGS of lesser writers. And there is more than a touch of Jules Verne and H.G. Wells at their best in the verve and excitement with which he crowds the pages of this new book.

My conclusion is that Sci Fi went mainstream around the 50's. I'm not a student of the history, but I recognize and have read all of the above. Never head of Castle, but I'll salute him in getting the big time publishers to figure out this crazy stuff was going to be big. Really, really big.

Just a blast from the past that I found interesting and amusing. The book ain't half bad either.
No comments:

Upload samples of your own work for readers. Now, let's see if I can embed this properly. Click on the little preview to go to the larger version. Sez here in the fine print, anyway. Oh, that's from my book "Tales of a Texas Boy" as published in e-format by Cantarabooks.

Email ThisBlogThis!Share to TwitterShare to FacebookShare to Pinterest
Labels: Cantarabooks, Tales of a Texas Boy

Weirdly is an anthology of speculative fiction by a motley crew of writers. It tends to the spooky, weird (hence the title), and somewhat icky.

What a great selection of weird and wonderful tales. Weirdly Volume 2: Eldritch is perfect for readers who like a bit of strange. The authors have explored many aspects of our world that could be possible—just that society tells us that it isn’t so. Who really knows if vampires don’t exist? Who can really prove that ghosts and parallel lives aren’t there right under our noses?

I prefer to keep an open mind, and on more than one occasion while reading I believed that there is more to this world where we live…we just don’t see it—or have lost the ability to perceive such things for ourselves.

Dianne Salerni, author of High Spirits: A Tale of Ghostly Rapping and Romance, presents a monthly spotlight of books by independant authors. This month, the spotlight is on Science Fiction.

My book, First Duty (available through The Genre Mall), is featured along with several others. Each book is presented with descriptions, cover art, and links.

Visit Dianne Salerni's Spotlight On page. The genre changes monthly. At the bottom of the page, Dianne has provided links to previous months' spotlights.
No comments:

All Dressed Up and Ready to Go 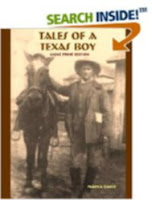 The latest incarnation of Tales of a Texas Boy - Large Print now has the Search Inside feature. This is a handy-dandy trim size for young and old alike.

The 18Pt type is eyesight-impaired friendly. I can even read it without my glasses.

Price: $9.95 and eligible for free shipping and handling.

For my readers who were so kind as to review one or more of the other editions of Tales, feel free to drop by this book's product page and click the star ratings at the top. If you'd like to repost your review, too, I'd appreciate that as well.

A big thanks to all of you who've told me how much they liked this book. It means a lot to me when a reader sends me a note telling me "I laughed, I cried. Thanks so much for writing this."
No comments: