The September issue of Fifth Di... is available for your reading pleasure. My tale, "Fish Story," is right here:

I live in Oregon in a mid-Willamette Valley town named, strangely enough, Eugene. It started out as Skinner City (Eugene Skinner), but for reasons only known to the City Fathers, it was changed to Eugene.

Eugene is the home of the University of Oregon. Way back in the late 19th C. when it was formed, the sports teams went by the name of the Tall Timbers. Okay, that's silly, somebody thought. So, they changed that to the Ducks.

If you're getting the idea that Eugene may be a bit wacky, you'd be on the right track--running track, that is. Eugene is also the Track Capitol of the World (not sure who awarded this) because of a guy named Bill Bowerman. He invented the Nike running shoe. He used rubber treads from old tires. Okay, wackier still, right?

For the last thirty or so years, the nearby town of Veneta (another great city that bears somebody's first name) hosts the Oregon Country Faire. Come on by around the first part of July if you'd like to party like it was 1969. Ah, the area is a hotbed of leftover hippies, organic farmers, hemp growers, and yurt makers--just about anything you might want for that alternate lifestyle you've been pining after.

I was born here and, barring a complete takeover by the even more wacko neoconservatives, I'll probably die here. This place is just too darn entertaining to give up.

People leave Eugene to go to the bright lights and big cities, but just about everybody eventually comes back again. They just can't stay away. So, be careful if you come to visit. You might be sucked into the Oregon Vortex. Wait, that's about 125 miles south of here in Gold Hill, so I guess Eugene is like a blackhole, or whirlpool, or the Elephant's Graveyard. Yeah, something like that.
No comments: 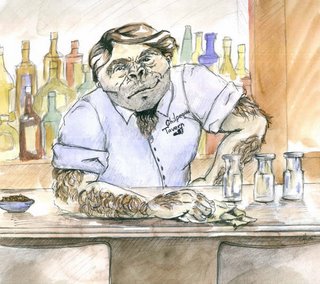 I think it's especially nice when one of my stories is illustrated for publication. I've posted a few of those illos before and here's another. The October issue of Lorelei Signal has my Bigfoot story "Chilpequin 22 Miles." This illustration is by Holly Eddy. I'll post the direct link to the story on October 1st.

Happy Birthday to Me

Today is my birthday, but since it's one of those off-year no-count ones, I'm not doing anything special.

I did get a spiffy new 20.1" wide screen monitor last weekend. It's very cool. I can now read the screen without too much eye strain.

I treated myself by finishing my novella. Of course, it's still got a ton of work, but all those summary notes starting with (((( on the page are now replaced with actual paragraphs and such. So, that's a nice accomplishment and a better milestone than being a year older.
1 comment:

Okay, I placed a story with a non-paying ezine. Cool. Nice of them and all that. So, here it is a few months later and I'm thinking "Reprint?" So, I search about and find another ezine that takes reprints, but they kind of want exclusive web rights. Okay, fine. I contact Ezine #1 and say "Can you take that story out of the archive?"

Then I wait, but no response. I emailed them again and finally got a sort of huffy note saying that they took the story down but somehow or other my decision has totally ruined that issue of the magazine while putting some photographer's photo off the ezine as well. I apologized for the inconvenience and suggested they simply just wipe out the story text and put in "Removed at Author's Request."

Now, I know this isn't rocket science. They don't have to completely break the link to the story. They just have to change the text. What is so damned hard about that? I could do that with any of the posts I've put on this blog.

Obviously, I'm a bit peeved by the ezine's inability to handle something which should be a perhaps not common, but at least a sometime occurrence.

I loved that ezine's format and dedication to making it a very nice venue. But, their assumption that nobody would ever request that their work be removed is simply naive on their part.

I think this whole internet publishing thing needs to get some standards set up so that authors and publishers will know how to handle simple things like this.

Well, I learned that ezines that don't pay you a penny for your work, somehow feel that they own it and not you, the author. They need to understand about copyrights and infringements on same. When I say "take it down" I ain't messin' around. The ezines need a procedure to handle it.
1 comment:

Am I getting better?

Or are the ezines getting desperate for coherent writing? Ah, that is the question.

5th Story Review, a brand-new ezine, just accepted by alternate history story, Jonathan Swift Finds Nemo. I have kept pushing this story on publishers because, damn it, I like it! Should I admit how many rejections I got? Nah, I'll leave that to your imagination, but suffice it to say there were plenty.

But, I'm happier than happy that one of my favorites now has a home.

I'll post the link when the story comes up.
Update: Here's the link:
http://www.5thstoryreview.com/Authors/Dasef.html
2 comments:

Another Acceptance at The Deepening

I got my first reprint published. The story "If You Could See Her" was originally published in the February issue of the Lily Literary Review. It is scheduled for the October issue.

The Deepening has accepted it and with a very nice note: 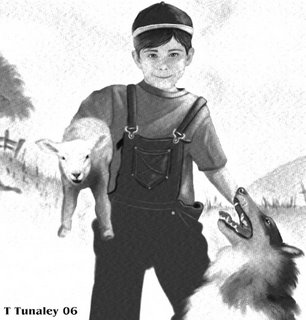 I just heard from Teresa Tunaley, the head honcho for Writers Post Journal and Artiste Extraordinaire. She was so kind as to send me the preview on the drawing she did for One Fine Dog appearing in the next WPJ issue. Here 'tis.
1 comment:

The current US pledge of allegiance has been fraught with controversy for quite some time. I first got ticked off at it when Eisenhower decided that God had something to do with it. I have always refused to include that "under God" part as being anti-American. The Founding Fathers may very well have been Christian, but so freakin' what? Actually, there was at least one Jew and a few animists, pantheists, and probably at least one closet Atheist. This was, remember, the beginning of the Enlightenment, where slavish adherence to religious tenants was being questioned all over Europe.

The other big bruhaha is in regard to what the heck we're pledging to: The Flag. Hmm. Sure, it goes on with that part about the Republic for which it stands, but still, I question if good Christians are breaking some commandment or other by worshipping an idol. Strictly speaking (and, boy! do these folks like those strict interpretations), the flag is a symbol and a symbol is an idol.

Okay, all of that aside, I decided I don't care for the Pledge the way it stands. Too controversial, in my opinion. My alternative pledge follows. I think it cuts to the chase and specifies what we should really be pledging our lives and sacred honor to: laws that promise freedom of speech, religion, assembly, and all that other stuff laid out in the Constitution and its Amendments.

I pledge allegiance to my country and the Constitution from which it was formed--one nation, under rule of law, with liberty and justice for all.
No comments:

I think that's the downsizing order. Novels are supposed to be at least 70,000 words, novellas 20K to 70K, and novelettes 10K to 20K. Or, something like that. It varies, depending on publisher.

So, I'm writing this novel that's turning into a novella, or maybe a novelette. Why is that? I've got chapters 1-8 pretty much written. Everything is there that should be there, but it's only 14,000 words. I'm looking at another 4 or 5 chapters and danged if it only adds up to a little over 25K words even if I meander around all over the place.

What's missing? Characters - check, fleshed out, fully-formed. Plot - yup, goes from a beginning to an end with a nice middle.

Am I a died-in-the-wool short story writer? Must be as anything and everything I think about adding I envision some critter (critiquer) saying "well, that's just excess crap--cut it out."

I just finished reading "Crypt0nomicon" for the second round. It's nearly 900 pages long. Neal Stephenson meanders off in these side things all the time. For goodness sakes! He's got four or five pages on the proper way to eat Cap'n Crunch cereal! Could I get away with that. I'm pretty sure that I couldn't.

So, I'll just see if I can get up to 25K words this time round. Maybe my next try at a novel will actually get to novel size. That's a lot of words. Hmm, can I write a couple thousand words on granola?
4 comments: