This is a reminder that BAD SPELLING, the first book in the Witches of Galdorheim series, is always #free at Smashwords. Just pop over and download whatever format tickles your fancy.

If you like it, the rest of the series is highly affordable. Click Bad Spelling at Smashwords. 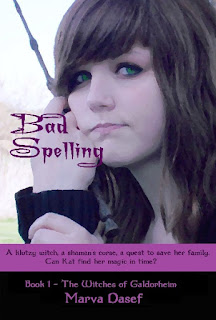 The young witch, accompanied by her half-vampire brother, must travel to the Hall of the Mountain King and the farthest reaches of Siberia to regain her magic, dodging attacks by the shaman along the way.
1 comment:

About that improving every day thing people talk about post-surgery...it doesn't work that way. If you graph progress, the idea is that there should be a generally upward momentum. Sort of, sure. The reality is that some days knock out several days upward progress with a downward trend. Kind of like the economy, the momentum depends on whether Republicans or Democrats control Congress and the Whitehouse. Here's a graph of the economy under the Presidents since Truman. Notice how the "tax and spend" democrats produce a booming economy, while the "trickle down" republicans tear the economy apart until the populace figures out how bad they are and put the Democrats back in control. 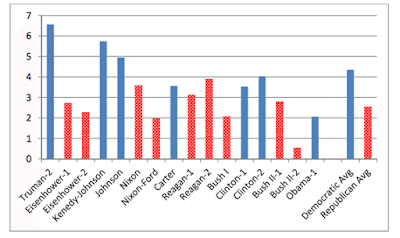 I'm just using the up/down concept of the chart to show how progress post-surgery looks. Put the wrong system in charge, and the backward result can be as bad as going from Johnson to Nixon in terms of forward growth.

Those who play 3-monkeys with the economy continue to insist that their way is the right way and, all evidence to the contrary, they stick with it. How do they keep duping the public? Generally, by skirting over the economy (boring!) and whomping up the base with social issues such as welfare or abortion. That small government sham is a smoke-screen to their desire for a totalitarian state run by plutocrats, and the GOP Congress is the enabler.

Whoa. I've run off course here because I was talking about recovery following surgery, and got side-tracked to economic recovery of the country. Oh, well. My post-surgery update sucks, but it's not near as bad as the reaming the GOP and Trump are inflicting on the US right now. Maybe that's part of why my recovery is rocky. I'm freaking depressed by the state of the nation. Do I think the Dems have the solutions? Not entirely, but they're our only hope, Obi Wan. Even if the Dems are the Jar Jars of the rebellion, at least they are working for the right side.

Your opinion on this only counts if you agree with me. If you don't, then shut your fat mouth.

Since it's clearly the End Times, I don't see much purpose in making any New Year resolutions. Oh, well. Everybody else is doing it, so here are some:


What about you? Are you making any resolutions? If so, do you have any I might contemplate borrowing since I can't think of anything else on my own.

January 5th: My brother, Darrel (no, I don't have another brother named Daryl). Here's a great shot of Darrel as the Eclipse King. Everybody got to wear the crown at some point or other, so he shouldn't get a swelled head.

January 16th: My longest running time friend, Beth Aylworth. I found this old picture from back in the days when we all played league darts. Eventually, Beth and her husband, Chuck, moved to Salem. No more darts, but we're all still friends. 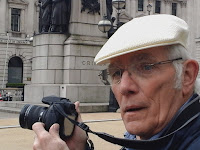 January 25th: My hubby, Jack Dasef. Here he is on one of our visits to London. We've since visited a number of other countries. Next trip, we need to expand our UK territory and visit Scotland, Ireland, and Wales.