In honor of William Shakespeare's birthday and, coincidentally, his deathday as well, I thought to give you a taste of how one of my characters likes to quote the Bard, but only MacBeth.

Cailleach the Winter Goddess
From Scotch Broom, Book 3 of the Witches of Galdorheim Series

Living in the Otherworld after the Celts have stopped worshipping the old ones, Cailleach has let herself go to seed. She spends her days attempting to make sense of the hags’ potion in MacBeth (Double, double, toil and trouble). When she hears that a witch has come into the Otherworld, she begins to scheme. If Cailleach can only steal the witch’s magic, she can be young and powerful again.

The warty witch peered into the cauldron. “It’s time. How did that spell go? You’d think I’d have memorized it by now. Ah, yes.”

Round about the cauldron go;
In the poison’d entrails throw,

Cailleach dumped the slimy, mottled-brown contents of a glass jar into the cauldron.

Toad, that under cold stone
Days and nights has thirty-one

“Let me see. Is this thirty or thirty-one days since I found the frog under the log. It says ‘cold stone’, but I’d think a cold log would work as well.”

Swelter’d venom sleeping got,
Boil thou first in the charmed pot.

Cailleach sniffed. “Hmm, does this look venomous, or just rotten?”

“Well, it’s bubbling. That’s good. Now, which of these mortars has the newt’s eye? That one looks more like a lizard’s leg, or is that goat’s gall?”

For five hundred years, she had been trying to make the spell work, and it always thwarted her. Some ingredients the weird sisters named when cooking up the brew just weren’t right. Either the witches made a mistake, or that Will Shakespeare fellow had written it wrong. Still, the notion appealed to her and she had plenty of time on her hands to play with the formula. She pushed the cauldron closer to the fire and watched the noxious eruptions rise to the top, then burst like so many boils on a beggar’s face.

Scotch Broom, Book 3 of the Witches of Galdorheim Series
A magical trip to Stonehenge lands a witch in the Otherworld where an ancient goddess is up to no good.
Buy the ebook and get the audio book for only $1.99

The Curse Servant by J.P. Sloan
My rating: 4 of 5 stars

This is the second in this series about Dorian Lake, a charming fellow. That is, he produces charms and hexes for his clients thus making a living, sort of. But he has to supplement his income with some rental property and an occasional toe-dip into nether magic--this is not a good magic. As a result of using netherworld curses, Dorian has lost his soul, but is actively trying to get it back again. For a soulless guy, he's pretty nice.

The daughter (Elle) of his friends, Edgar and Wren, is possessed by something, and whatever it is, it does not like Dorian Lake in the least. But the consequence of Elle's possession is killing her and Dorian has to fix it. Since he doesn't possess the particular required skill, he's got to bargain for it from another magic worker. But she wants a certain person who she expects Dorian to deliver to her in exchange for ridding Elle of the demonic presence.

It gets complicated fast with other people after other things requiring Dorian to do some less than ethical swapping around. He ultimately also wants to find and restore his own soul.

No reason to go any further with the plot. You'll just have to read the book. Oh, right. Be sure to read The Curse Merchant (book 1 of the series) to get yourself settled into the urban magic served up by J.P. Sloan.

I really like Sloan's descriptions and use of magic, hexes, spells, curses, and possessions. While I recognize some of the arcane use (what fantasy reader wouldn't?), Sloan is spot on in taking all the magic practices and using them in an updated environment.

Despite the series title, The Dark Choir, the books aren't dark at all. More like fast moving adventure with Dorian Lake running through trying to fix things, and having to get really creative doing it.

The books are hard to describe, but that's a good thing. You won't get your typical wizards and wands, but something quite different. The only thing I can compare them to is Jim Butcher's "The Dresden Files." Just start reading them, okay?

Since I had purchased and reviewed the first book in the series, Curiosity Quills Press, gave me a free copy of this book for an honest review. Okay, I'll confess, they gave me the third one as well. If it was a bribe, then it worked out beautifully for me. I would have bought the books myself anyway.

View all my reviews
No comments:

And When I Die

I've always liked this Blood, Sweat, and Tears song because it's so hopeful and positive. It's also a really great song for those contemplating suicide. Now, I don't recommend the latter, but it does soothe the soul. It also is kind of a natural for Easter, eh?

Email ThisBlogThis!Share to TwitterShare to FacebookShare to Pinterest
Labels: Dyin' 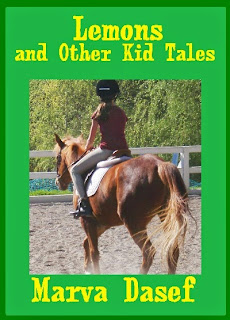 Here's a free week of the children's book, "Lemons and Other Kid Tales." There are three animal-based stories suitable for kids. Photos illustrate the stories, but this isn't a picture book. It's for a kid who can read about 3rd grade level, but younger kids would probably enjoy having the book read to them. I need to have the book's KENP established. So, please download your free copy and flip through the tales. Hey, there are even color photos!

The stories are:
Lemons - Karen is horse crazy and works hard for Mr. Fredrichs to earn a ride on his draft horses. She wishes more than anything to have a horse of her own.

One Fine Dog - Dogs weren’t just pets, but working members of the family. Sometimes, they could do amazing things and perform feats that were almost like magic.

A Practical Cat - Boots is nothing if not a pampered and lazy house cat, but he gets it in his head he'd like to explore the world outside the house.