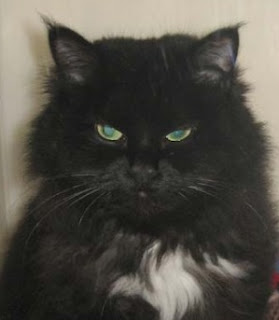 Many many, many, many writers are in love with the Celtic myths. I’ve delved into them, too. However, I’m not a big fan of the flitty little cute faeries (or fae or fairies). In Celt mythology, there’s a fairy (or fae or faerie) for just about any purpose. The “serious” fantasies love the idea of the fairy troupe. More than a few equate fairies to Arthurian legends, more specifically Merlin.

Anyway, I found a particular sidhe I liked. She’s a big black cat with a white chest. Aha! I happen to have had the model for said cat (in a much reduced size) sitting at my door every morning demanding a handout. We call her Bitch Kitty. Yes, she has attitude in spades. So, there’s my model for Cait Sidhe, a companion to my erstwhile heroine, Kat. (Unfortunately, Bitch Kitty has crossed the Rainbow Bridge where she's giving grief to all those around her).

Excerpt From Scotch Broom, Book 3 of the Witches of Galdorheim

Kat has already found two companions: Sianach a stag and Cusith (another sidhe) a giant, green hound. They’re tromping through the swamps trying to find the Trow King’s hall in the middle of the Otherworld (the alternate magic world in the Scottish Highlands).

“No, don’t! Don’t hurt it,” Kat called out. Cusith turned his head toward her, tongue lolling.
“I won’t. It’s not food.”

“It’s a cat!” Kat said. She reached out with her mind, but met the same blank wall she had with Sianach and Cusith. So, she tried the old-fashioned way. “Here kitty, kitty. Nice kitty.” An ear-splitting yowl almost knocked Kat back on her rear.

* * *
Buy Scotch Broom at these sites:
MuseItUp Publishing - All Ebook formats
Kindle - best price $1.99
Print
Or get all three Witches of Galdorheim books in a single monster volume. 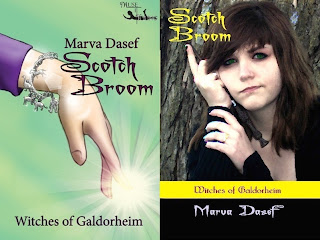