Look Out! Jack the Ripper is Out to Get YOU! 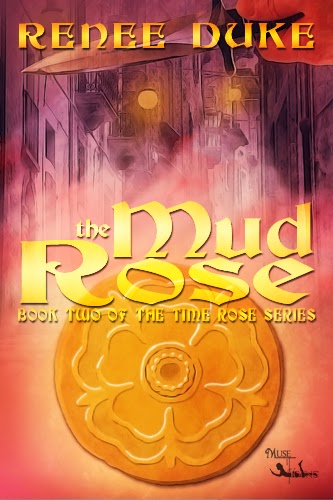 Life’s hard if you’re a Victorian street urchin, and crossing the path of Jack the Ripper can make it even harder.

Another journey into the past takes Paige, Dane, and Jack to Victorian London, where they meet two young mudlarks named Hetty and Pip. Even though life is difficult, Hetty is leery of seeking help from Dr. Barnardo or other social reformers who might separate her from her little brother. The Time Rose travellers have an idea for getting around that problem, but they’re about to have another. Jack the Ripper’s grisly attacks on women in the East End have the whole city on edge – and the blood covered man Hetty and Pip come across late at night isn’t keen on having witnesses on the loose.

You could win a free copy of The Mud Rose by leaving a comment voting for your choice in regards to Jack the Ripper’s true identity.

(See the end of the post for a wonderful giveaway game.)

Thanks for having me here today, Marva. I now have a blog, too, Time Travelling With Kids which is at http://reneeduke.wordpress.com/.  I’ve been doing interactive history units with 6-13-year-olds for several years, and use to the blog to offer up both historical information and ideas on how to bring kids and history together. Lately I’ve had several posts up about Victorian times, the era in which The Mud Rose is set.

The Mud Rose is the second of five books in my Time Rose series, which is about the adventures of three kids (Paige, Dane, & Jack) who use an ancient medallion to travel through Time and help children who are in trouble. In the first one, The Disappearing Rose, they connected to the two princes who disappeared from the Tower of London in the fifteenth century. In The Mud Rose, they connect to a pair of young mudlarks – children who found items in the mud of the Thames and sold them on so as to have enough money for food and lodgings. Hetty and Pip don’t just have poverty to contend with though. This is the time Jack the Ripper was terrorizing London, and a blood-covered man they saw running through the streets one night is trying to eliminate them as witnesses to his nocturnal activities. Having got Hetty and Pip to attend a Barnardo-run ragged school, the modern day kids think it might be best if they use that organization to get them out of the country through a child migration programme that placed youngsters on homesteads in Canada. But, of course, that doesn’t go quite according to plan.

Despite the controversy over practices like child migration, I’m an admirer of the work of Dr. Barnardo. Barnardo and other Victorian child care organizations did the best they could for kids in relation to the times they lived in. Most of the charges of abuse and neglect laid against these organizations came from later eras, after Barnardo, Quarrier, and the other original founders had died and other people were in charge. Traffic came to a standstill in London during Barnardo’s funeral because so many people wanted to pay their respects, so the people of HIS time, obviously didn’t question his devotion to children.  I wanted to show that in a story. I also wanted to bring awareness of child poverty and child labour, which by now should be ‘history’, but regrettably is not. In many areas of the world, children still have to work at backbreaking and/or dangerous tasks from dawn to dusk just to obtain food and shelter. I once worked in a Third World country through World Development & Peace. Trust me, you never forget walking down a street at night and seeing small children curled up asleep with empty bellies (the average age for being turned out on the streets to fend for yourself was eight). We helped as many as we could, but we barely scratched the surface. That was back in the late 1970s, but it’s no better today. In fact, I think it’s worse.

That explains the Barnardo aspect. If you’re wondering how Jack the Ripper fits into this, well, he was around at the time, and while he didn’t target children, I don’t imagine he would have had any scruples about removing any who inadvertently saw him about his nefarious work. His killing spree only lasted from August 1888 to November 1888, after which, murders with his signature on just stopped. What happened to him, and who he really was, remains a mystery. And when something is a mystery, people in general, and writers in particular, can … speculate. There were, and are, several theories as to who the Ripper was. These include:

(A) Alfred Napier Blanchard. Why? Because he confessed. Mind you, several people confessed, especially drunks, but even though Blanchard had been drunk for three days when he made his confession, other drunks thought it had a kind of authentic feel to it, and who’s to say they weren’t right?

(B) Dr. Thomas Neill Cream and/or his Double. Why? Because he did kill people, and though imprisoned for life because of this, was later let out for ‘good behaviour’ (obviously didn’t try to do in any fellow inmates, then). True, he was in prison during the time of the murders, but he was reputed to have a double, and it could have been the double who was actually serving time in prison just then couldn’t it? Well, couldn’t it?

(C) Prince Albert Victor Christian Edward ("Eddy”), grandson of Queen Victoria. Why? Because he wasn’t the brightest jewel in the crown, and hey, it’s exciting to pin something on a royal. The fact that he was miles from London at the time of the attacks is irrelevant. That could easily be faked, right?

(D) Dr. Thomas John Barnardo. Why? Because he was often in the Whitechapel area late at night. Claimed he was looking for homeless children. What kind of lame excuse is that?

(E) Charles Lutwige Dodgson, otherwise known as Lewis Carroll. Why? Because, brilliant scholar and mathematician that he was, he liked to invent anagrams, some of which could, maybe, possibly, if you worked them out properly, be a record of how he committed the murders.

(F) An Insane Jew (Name Unknown for sure, but asylum inmates David Cohen, Jacob Levy,  and Aaron Kosminski were among those suggested) Why? Because blaming Jews for anything bad that happened had years, make that, centuries, of precedent. They made great scapegoats, and being insane as well was a bonus.

(G) A Deranged Midwife (Name Unknown). Why? Because there was no real reason the Ripper had to be a MAN, was there? Like a doctor, a midwife could walk around late at night, covered with blood, without arousing suspicion. (Except from the people who came up with this theory, of course.)

(H) A LOW PROFILE, EVERYDAY-LOOKING PSYCHOPATH who never came under suspicion and only stopped because he met a sudden, unexpected end through typhoid, cholera, accident, barroom brawl, etc.

Thanks again for having me, Marva. If any visitors would like a chance to win a free copy of The Mud Rose, all they have to do is leave a comment stating which one they’d vote for. (Write-ins encouraged, if they have other ideas. There have been a LOT of suspects put forward over the years.)

A few minutes later, the governor brought Hetty and Pip back to the receiving room and told Paige that someone would take the two to Old Rosie.

“The rest of you will be safely seen to Mr. Hollingsworth’s house in Mayfair. Even though he is out of town, I imagine he has arranged for you to stay there.”

“Yes, he has. But we’ve been talking, and we think it’d be better if Hetty and Pip were to stay there too.”

“Oh…yeah.” Hetty gulped, her fears about being stalked by the Ripper returning.

“As you wish,” said the governor, a trifle impatiently.

“Hang on a minute, though,” said Hetty. “We still wants to see Old Rosie. We can’t just up and leave the country without saying a proper good-bye.”

She looked pleadingly at Paige, who sighed resignedly.

“Okay. We’ll go there first. You don’t have to take us to Uncle Clive’s,” she told the governor. “He doesn’t mind us going about alone.”

“But I do. You will be accompanied, first to the home of these children’s great aunt, and then to Mr. Hollingsworth’s residence.”

Unable to banish thoughts of crossing paths with Jack the Ripper, they did not really mind having an escort. The scrawny young man named Cedric might not have been much use in a fight, but just having him along was reassuring. Even if he did look less than pleased with the assignment.

The Ripper was obviously on other people’s minds, too. They passed a few children wheeling scarecrow-type figures in makeshift carts whilst calling out, “Penny for the guy.” The guys all had villainous countenances, and sported dark capes such as the Ripper was reputed to wear.

“Bonfire night tonight,” Hetty told them, identifying the date as the fifth of November, when people celebrated Guy Fawkes Day with bonfires and fireworks. “Not likely to be much of a turnout, though. Folk’s leery of being out after dark now. We shouldn’t’ve been neither, the night we saw him. Old Rosie near did her nut over it. Said we should have stopped with our mates ’til morning. S’pose we should, but I didn’t want her wondering where we’d got to.”