How I Ticked Off a Witch...

and Didn't Get Turned into a Toad (yet!)
by Stuart West
FAMOUS AUTHOR of The Tex the Witch Boy Series

Thanks for having me on your blog, Marva, from one witch biographer to the other. 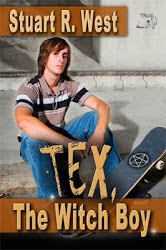 Okay, so, my Tex the Witch Boy trilogy deals with witchcraft. Um, you probably gathered that from the title. I delved heavily into the world of witchcraft, researched it quite a bit. I picked, plucked, tweaked, changed, and formed details I found to fit my narrative. Sometimes I made things up. Having Kansas in the center of a United States pentagram was just a lucky accident, better than finding a buck on the sidewalk. Sure, I cheated at times. But most of what I detail is true. Well, as true as the intranets can be at times, of course.

In my researching travels, I actually had the pleasure to meet a witch. Now before y’all start pitching a fire, ready to toss me onto the logs, let me explain. Yes, there are witches. No, not like the Wicked Witch of the West. To simplify matters, they’re a serious bunch, mostly dedicated to the love and worship of nature.  I was curious about what he thought (and, again, yes, male witches tend to proclaim themselves as “witches,” not warlocks) so I sent him my book.

Yikes. He came back a little perturbed. While actually liking the book quite a bit on an entertainment level, he took umbrage to my portrayal of witches.  He said I treated witches as a fictional construct, a buncha’ hocus-pocus. I didn’t understand the real focus. (And I just realized I rhymed like a witchcraft spell, what the hell?).

Well. Guilty. But I was torn. I’m not a biographer or journalist. I didn’t set out to write a no-holds-barred account of witchcraft. Nor did I set out to slag witchcraft as a serious practice. On the other hand, I didn’t want to get turned into a toad.

Back to the research grinder. And, yes, I discovered more about witchcraft as a belief. I incorporated my new understanding into the third Tex book, Tex and the God Squad. It just so happens the book was already dealing with religion as a subtext anyway, and it dovetailed perfectly.

My witch pal was a happy witch when he read one particular sequence. Thought I treated his beliefs with respect and understanding. No unsightly warts or gills growing on me. Whew.

But enough about me. What I experienced is nothing compared to what my protagonist, Tex the Witch Boy lives through in the trilogy. I tend to think of the books as “suburban paranormal” tales. It was important for me to keep one foot firmly planted in reality as I wanted to reach as many teens as I could with the tales. They’re not just entertainment (although, yeah, I kinda’ hope you guys enjoy them). But rather, I took the idea of a normal kid, finding out about his witchcraft heritage, and wrapping it around meaty, weighty social issues. Tex tackles bullying, self-worth and identity, suburban gangs (yeah, like witches, they, too, exist), gay and lesbian issues, teen suicide, religion and other topical subjects. It’s not all soap-boxing, so don’t leave yet. The books are all self-sustained murder mysteries told with, I hope, a lot of heart and humor.

This summer, I’m especially stoked about MuseItUp Publishing releasing a spin-off book based on my favorite character, Elspeth, the Living Dead Girl. I’m particularly proud of this book (think it’s my strongest one yet), because it was extremely challenging to write. The topic this time? Drugs. It’s a twin, first-person narrative, detailing the adventures of two very different teenage girls sharing the same body. It’s complicated. But coming from a 52-year-old man? A feat worthy of witchcraft.