Mothers Day is coming up. If your mom is in the same generation as my mom grew up in the 20's and 30's, experienced WWII as an adult, and is fond of stories set in rural America, this is a book she will enjoy.

These are stories about my father. He's passed now, but he took great pleasure reading his almost true tall tales. I think you'll enjoy them too.

Here's a bit on some of the stories. At the end of the post, you'll find links to the ebook, print, and audio book.

While nobody lived so close by you could talk over the fence, there were neighbors. Some of them were just a bit stranger than the others.

FRED AND FRANK Luck lived up the road about six miles. We didn’t have much to do with them, but one time we, meanin’ Pa and me, had to go visiting. They was an odd pair, bein’ identical twins who purely hated each other. Their ma died when she birthed them and their pa pretty much let them go wild. A few of the womenfolk hereabouts helped out when they were just babies, but once they got to ten or so, they pretty much did what they pleased. 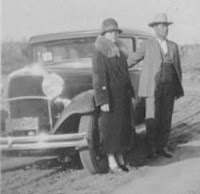 Mothers have their own joys and sorrows. Too often they keep their feelings to themselves and even their own families don’t know. 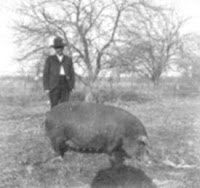 Even small towns can come up with odd characters. Cage McNatt had to be one of the oddest.

I’VE HEARD OF men gettin’ all fired up about their horses. I’d even heard of a man who had a steer he took with him duck huntin’. But, I still can’t understand how Cage McNatt was so taken with a pig. After all, a pig generally ends up bein’ ham and pork chops, but Cage McNatt was mighty fond of his sow. He even named her, which is unusual right there. He called her Petunia, which I thought was a darned silly name for anything, even a pig.

All kids eventually grow up, but in that in-between time interesting things can happen. When Eddie moved to East Texas and began High School, he joined the football team. The team was good enough to go to the State Championship. Along the way, he meets a woman who turns his head around.

LIFE WAS TOUGH in the 30s, but people didn’t complain, they just tried to get along as best they could. When I was gettin’ in my teen years, times were tough enough that Pa decided we’d move the family to East Texas. The reason for this is in one word: oil. My uncle Alex started up in the oil business and he’d invited Pa to come help out. This was fine with Ma, as Uncle Alex married her sister Alma.

Email ThisBlogThis!Share to TwitterShare to FacebookShare to Pinterest
Labels: Mothers Day, Tales of a Texas Boy