Preview of the Week - New Book by Lorinda Taylor 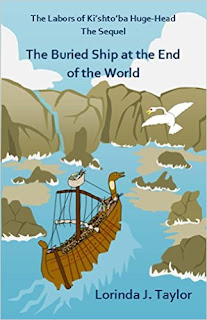 The Ship Buried at the End of the World (Amazon Link)
(The Labors of Ki'shto'ba Huge-Head - The Sequel)
by Lorinda J. Taylor (Blog: http://termitewriter.blogspot.com/)

While many of the participants in the Quest for the Golden Fungus have been lost, the Quest continues under the leadership of Is’a’pai’a Gold-Seeker. Di’fa’kro’mi’s Scribe Chi’mo’a’tu, with the help of wandering Remembrancers and the Star-Brings, undertakes to compose the tale of the final adventures, with the Seer Da’sask’ni’a as the principal narrator.

As the remaining Companions set forth on the last leg of their voyage, new additions to the company lead to both jubilation and tragedy. Then they must dare the dangerous Wandering Rocks and the Closing Gate before sailing to the End of the World to find the Fungus. After planting the reptile’s teeth and dealing with the results, Is’a’pai’a finally returns home to Hwai’ran’chet, bringing along a surprise addition to the company – a Sorcerer and Seer who may be far more dangerous than she appears.

And now for a fascinating excerpt from this final (who knows?) chapter of the series. Enjoy!

As we were crossing the central trading area, our senses were assaulted by wailing from an emaciated and stinking Alate who had come into our path.  “Stay – stay – speak with me!  I have long possessed a gift that I am holding for another and I have been unable to die until I find the one on whom I must confer it.  Speak – speak with me!  Stay and speak!”

We all halted even as a crowd started gathering and someone said, “That’s crazy Mat’hak’tei’a!  She claims to be a great Sorcerer and Seer.  Who knows?  She may actually be one of those.  Stranger things have happened.”

My attention had been caught by the bag the old Alate held aloft in a shaky claw.  I clutched our Captain.  “Is’a’pai’a, speak to her.  She is carrying a bag.”

“Ah.”  Immediately understanding the implication, Is’a’pai’a stepped forward.  “Have you found the one to whom to give the gift?”

The Alate skittered up, thrusting the bag in Is’a’pai’a’s face.  “Open it and learn what lies within, Eastern Champion!”

Is’a’pai’a did so, and I peered into the bag.  It was full of teeth such as might be extracted from the jaw of an enormous reptile, and my setae prickled and stood on end.

“Seer, do you have a tale to go with these teeth?”

“If you will take me to the nearby public refectory and feed me until I no longer hunger or thirst, I will tell you the tale.”

Well, that was easy enough to do.  Mat’hak’tei’a stuffed herself with wood chips and shredded fungus until I thought her belly would burst even as a crowd pressed around to receive her tale.

“Mighty Captain-Leader, once long ago there are fortresses in all the lands of the South, ruled by a great Champion named Pai’grin’a.  In those parts it is the custom to seek out holy springs and bring water to the fortress to bathe the Mothers at certain festivals.  A Seer tells Pai’grin’a to go to a particular spring for the rites of lat’nol|, but when it gets there, it finds a huge reptile guarding the spring, ten times as big as even that Champion who once traveled with you, who has been taken to the stars.”

We all jigged in astonishment.  How did this mad old Alate know about Ki’shto’ba?  We had told our tale in the fortress, but we had never mentioned that our Champion had been taken to the stars.  We began to pay closer attention.

“This reptile kills many of Pai’grin’a’s guards, but the Champion will not give up and fights long and hard.  Finally the reptile says to it, ‘Yield to me, Warrior fool.  You cannot kill me!  I am sacred to the War King!’

“But Pai’grin’a does not yield.  ‘Water from this spring must be taken to the Mother, and if I return without it, I am disgraced and as good as dead anyway.’  And it fought on.

“Finally it senses that the reptile is weakening and it picks up a huge boulder and bashes the reptile’s head.  ‘Ai-i-i, now you kill me in spite of my divine strength.  You are the mightiest of Champions, and so before I die, I will give you a gift.  Cut off my head and pull out my teeth, and sow them in the soil as if you were planting the fungus spores or the seeds of fruit trees, and I promise you a great wonder will result.’  And the reptile expires with a prodigious thrashing that in itself almost kills Pai’grin’a.

“Pai’grin’a’s companions advise it not to accept the reptile’s gift, because such creatures are notorious for their devious natures.  But Pai’grin’a, swelled up with its own prowess, scoffs at its companions for being weakling cowards, and it pulls the many many teeth and plants them as if they were the seeds of fruit trees.  And immediately the ground begins to heave and then it opens up and out leap burly, bristly Warriors with huge jaws and a terrifying smell of invincibility about them.  They begin to attack Pai’grin’a and its remaining companions, but these Tooth-Warriors are not very smart and have little strategic sense, and when Pai’grin’a throws a stone at one of them, they do not know who threw it and they all turn and begin to attack one another.  Gradually they kill each other until only five are left, and these realize they would do better to surrender and to offer their services to Pai’grin’a instead of dying for no reason.  And that is the origin of the Tale of the Sown Warriors, who still live to this day in some part of the Lost World of the South.

“Half of the reptile teeth are not sown, however, and as time goes by these teeth pass from Champion to Champion and fortress to fortress, until no one knows what has become of them.  But, good Easterners, one day I was foraging in a distant land – yes, I have wandered far, even as you have – and I came upon this bag in an abandoned cave-shrine, where the sea goes in and out and makes great spirit-music.  As I picked it up and peered inside, a ground-quake struck and I rushed out of the cave even as its ceiling crashed down behind me.  I brought the bag out with me and I stored the words of the cave-music in my remembering – ‘These are the seeds of the Sown Warriors.  One day you will give them to an Eastern Champion.  Until that day comes, you cannot die.’  And so I have lived longer than any other Sorcerer ever on this world.  I beg – do you have any more of that wonderfully delicious orange berry that I ate just now?”

The Chief of the establishment shoved another bowl at Mat’hak’tei’a, who unconcernedly began to stuff herself again.

We all stood confounded.  Finally, Is’a’pai’a said, “If giving away this gift dooms you to die, I would not think you would be so eager to part with it.”

“Yes,” said Wei’tu, “I am wondering how many other bags of teeth you have given away in return for food.”

And Bu’gan’zei said nervously, “Can you see anything concerning my head?”  He had already asked the fortress’s Seer that question and received only an inscrutable stare in return.

“One day your head will be parted from your body, but not yet,” said Mat’hak’tei’a.

Well, that remark shook us, too, because how could this ancient creature know about that prophecy?

“To appease your skeptical natures,” said Mat’hak’tei’a, “I will only say that my life must come to an end sometime.  I have no fear of death.  I understand the fruit and the twigs of the Afterworld are more tender than anywhere in this world of reality.”  And she tossed more berries between her jaws and chewed lustily, dribbling juice down her palps.

My ocelli had begun to ache.  “Is’a’pai’a, take the gift.  We all know this answers the Seeing of Ko’zim’tuk’zei.  Apparently, this Seer is on Ko’zim’tuk’zei’s path and the fortress’s Seer is looking elsewhere.”

So Is’a’pai’a accepted the gift from Mat’hak’tei’a, who began to praise our Captain – “Remember the tale, magnificent hero!  Do not forget to remember the tale!”  Then she grabbed a large bundle of twigs and bolted off down the byway, but before she lost herself in the crowd, she turned around and cried, “North!  Go north!  You will regret your stubbornness if you do not pay a visit to the Northern Guardian!” and then she was gone.

Email ThisBlogThis!Share to TwitterShare to FacebookShare to Pinterest
Labels: Preview of the Week