I sent this story out only once in 2007. I had no idea where it might belong, so didn't bother subbing it again. The result is that it never made it into my collections (Mixed Bag and Mixed Bag II: Supersized). Since I've run out of promo material, I'll unleash this upon the world just for fun.

"Ted is Mike's his best friend, so he can’t be too bad. You do like Mike. So come on, please!"

My best friend, Freida, was begging me to go out with this guy, just to make it a double. Rats! I didn’t want to go on some blind date, but what can you do when your oldest pal begs. How bad could it be? One evening, a little dinner, some conversation, a couple of drinks and I’m outta there.

I dressed carefully. I didn’t want to look too sexy. Shouldn’t give any impression that I want to do anything except talk. Yes, pants and a nice top. No dresses or skirts. Too dangerous. Men! 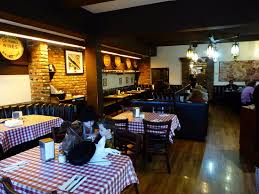 I said I’d catch up with them at Tony’s, a pleasant Italian place with excellent food. I asked Freida who decided on this restaurant and she said Ted did. Okay, he had good taste. That was a plus.

When I walked in, the place was busy as usual. Diners sat at little tables with those cute red-checked tablecloths. It was noisy, but you've got to expect that at a popular restaurant, especially with the waiters singing 'O Solo Mio' to collect extra tips. I looked around to see if the others had shown up. I saw Freida waving to me from the back of the room and I wended my way through the tables.

He stood up when I got to the table. Hmm, he had manners. We shook hands as Freida introduced us, "Jean, this is Ted, Ted, Jean, Mike, Jean, Jean, Mike." She giggled at her joke. She never giggles unless Mike was around. I pasted on a grim grin and took a good look at Ted, my putative date for the night.

Red hair. Uggh. He tended to fat. Maybe it was muscle? Nah, look at that arm, it was fat.

He held out his hand and said, "So, Jean, Freida says you’re a computer programmer. How do you like that?"

"S'okay," I said as I pumped his hand once. It was limp and damp. I suppressed a shudder. I sat, picking up the cloth napkin and drying my own hand as surreptitiously as possible.

"Uh, Ted owns his own business, Jean," Freida jumped in when she saw I wasn’t exactly gushing over this guy.

"Oh. What is it?" I asked to be polite. I really didn’t give a rip and figured it was going to be a long evening.

"I own Krazy Komics down on Fourth Street," Ted informed me. He grinned, looking proud of his status as a business owner. My God, a comic book store! He fairly oozed nerd from every pore.
He asked, "Do you read comics?"

"Not since Uncle Scrooge," I countered. No reason to encourage him, even if I did pick up a few of the avant garde illustrateds on occasion.

I pretty much clammed up after that. No way was I ever going see this guy again in my entire unnatural life. Why bother?

The three of them kept up the conversation without me. Ted glanced at me often. Trying to read me? Well, they didn't publish me in his comic book world.

After dinner, we, or I should say they, decided to walk down to the city park. On mild evenings, freelance musicians hung out there, playing for tips. Some were even good. A walk in the cool night air would be okay, I thought.

I should have thought twice. Ted quickly put his arm around my shoulders and tried to guide me along. What did he think, I needed a seeing eye dog?

I twisted deftly out from under his arm and walked a little faster. He actually broke out in a trot to catch up to me! He was about three inches shorter than me, so I could cover more distance than he could. I made sure to stay ahead of him, but not so far that it looked like I was running for my life.

I was trying to think of some way to end this debacle, but I knew Freida would be pissed at me if I dropped out before ten o’clock. So, in the interests of friendship, I hung in through the walk (run!) and the stop at the coffee house for some cappuccinos. In the booth, he tried to put his arm around me again. I scooted clear to the wall, regretting that I had been forced to get in first. Trapped! I would have climbed the wall if they hadn't covered it in smooth plaster.

I gulped my cappuccino and yawned. With a certain amount of stretching, I managed to push his arm away.

"Well, I guess it’s time for me to go home," I finally declared on the stroke of ten o’clock.

"Gotta go to work tomorrow." Why didn’t he get it?

"Well, I’ll call you. Maybe we can go out again. Next weekend? A movie?"

My God, he wouldn’t give up!

WHAT! I looked at Freida and she shrugged. I glared at Mike and he suppressed a grin.

I shoved Ted out of the booth and he almost fell on the floor as I fought my way in front of him. He grabbed my hand. Luckily for me, he still had a half-full cup of coffee in front of him. I elbowed it into his lap. When he grimaced and grabbed at his crotch, I got my hand away.

As I sped out of the coffee house, I heard Ted call after me, "Does this mean we aren’t going out again?"

Email ThisBlogThis!Share to TwitterShare to FacebookShare to Pinterest
Labels: Randomness