Setara Has Her Say 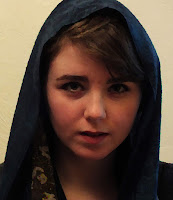 I didn’t set out to be a hero. All I wanted was a little romance in my life, just the slightest bit of adventure. Was I seeking danger? Did I wish to consort with demons? Heavens, no! I will have to admit, though, the idea of being the future wife of a rich merchant was highly unappealing.

When the mountain raiders kidnapped me, I thought that I’d have neither adventure nor much future at all. Especially when the raiders threw me into the cave as a sacrifice to the demon who supposedly ruled within the mountain.

I’m happy to say that Basit wasn’t a demon at all, but a genie in search of a new master. I wondered what happened to his old master, and he assured me the man died of natural causes. I also wondered why Basit wasn’t in a bottle or lamp as the legends say. Again, he assured me that only the stupidest of djinns would get themselves caught in that manner. Genies choose their masters, and Basit thought that having a female master—a mistress, so to speak—would be a nice change of pace.

Once he forced me to figure out how to get out of the cave, he continued to be of little help. Well, that’s not entirely true. He did change a camp dog into a sheik (a handsome one, of course) when I asked him to, but that didn’t work out entirely. It seems that Basit prefers to have his charge (that’s me) figure out how to rescue herself. Sheik, when returned to his dog self, became my close companion from then on. So, something good did come from my wish for a rescuer. It just turned out not to be as romantic as I first believed.

Once I had tasted freedom and a touch of adventure, I hungered for more. It occurred to me that some other poor soul might be thrown into the cave for the demon to eat (even though there never was a demon), and it was up to me to rescue them.

I wasn’t sure how to get Basit’s attention, since he simply disappeared once I was safely home. It turned out that calling him worked eventually. I’ll have to say he sometimes takes his own sweet time to answer my summons. Not a very obedient Djinn. I got used to him, though, and we enjoyed many adventures together. But our first adventure (after my initial rescue) turned out far different than I imagined. There was, indeed, a lost soul within the cave, but not exactly what I expected.

Throughout our adventures, I gained the dearest of friends. Who would believe I could love demons, fire-breathing horses, sentient eagles, or even a genie? There are many more brave and true companions I met. They taught me the meaning of love, loyalty, and bravery. Yes, they made me a hero. For that, I’ll be forever grateful.

Note: Several of Setara’s unusual friends take part in the following scene. Briefly, pirates had stolen a mare, the beloved of Hasib (a talking, fire-breathing horse). The friends, determined to rescue the horse confront a nasty array of pirates. All of them show great bravery, but Setara leads them, willing to risk her own life to aid her friend, Hasib.

In just the time that Sulawesi guessed it would take them, the little troop arrived at a dune overlooking the cove where the thieves’ galleon lay in the water. The thieves were already at the beach, preparing a pair of small skiffs to row out to the galleon. The thieves tied the stolen horses together, one horse to the next; nose to tail. A sailor on the ship was rigging a sling to the yardarm. Clearly, they were planning to make the horses swim out to the galleon.

“We need to hurry before they leave the beach, or we’ll not catch them,” Setara said.

“I’m sure I can find something to delay their departure,” Basit replied.

“Allow me,” Sulawesi said, spreading his wings. He soared down toward the beached skiffs. The rest of the troop went over the top of the dune and hurried toward the thieves as fast as they could through the shifting sand.

Setara gasped as she struggled to run but made little progress. “Basit, can you make this a bit easier? Make the ground hard.”

Basit waved his hand, and the sand became firm beneath their feet, allowing the motley crew of adventurers to run toward the captured horses.

The thieves looked up, pulling out knives and swords. Setara thought maybe she hadn’t planned this out well enough but drew her own small knife and hoped for the best. A scimitar appeared in Basit’s hand. The two demons bared their claws and fangs. Hasib puffed real flames with every leap. Sheik barked furiously as he ran. Setara hoped they looked fearsome as they dashed toward the thieves.

The thieves also had a formidable array of sharp weaponry and did not appear afraid of the strange group attacking them. The two groups met in a clash of swords, knives, howling demons, a diving eagle, a leaping dog, and a flame-throwing horse.

“Let go of those horses!” Setara screamed and leaped at a thief. She slashed her knife downward, cutting a long rent in the thief’s sleeve. He rounded on her with a sword, and she held her knife up to block. The sword slid off her knife blade, but the man immediately drew back his arm again. She was not ready with her knife, so she ducked her head, hoping to evade the sword slash. She heard a scream and looked up to see the thief flying away from her. “What the...”

A snort that sounded much like a laugh came from her left. She turned to see Hasib with a horsy grin on his long face and his powerful hind legs hitting the ground where the thief had been a mere second before.

All around, her friends were struggling with the thieves. Those confronted by Azizah and Kairav lost their will to fight and went running down the beach as fast as their legs could carry them in the loose sand. Setara thought it was a wonderful thing to have demon friends.

Sheik had bitten down on the arm of one of the thieves and was shaking the man back and forth. Basit laid about with swift strokes of his scimitar, forcing the men back toward the ocean. Unfortunately, another skiff had just come ashore with several more pirates. The thieves now outnumbered them nearly three to one.

“Basit! You must do something,” Setara shouted. Basit didn’t seem to hear her as he beat off the attack of one of the thieves. She wondered why he didn’t use magic but had no time to think about it. She saw a thief slash down on Kairav, sending the pool demon staggering back with a deep cut, blue blood pouring down his brawny arm. Another smacked Azizah on the side of the head, sending her reeling. Sheik yelped in pain, but Setara could not spare a moment to look while she fended off a muscular thief wielding a heavy club.

TALES OF ABU NUWAS: SETARA'S GENIE
A girl, a genie, a few demons. What could go wrong?

Email ThisBlogThis!Share to TwitterShare to FacebookShare to Pinterest
Labels: Setara's Genie, The Tales of Abu Nuwas