Vets of WW I

EBOOK FREE TODAY!
Large Print Paperback Supposed to be on Sale $7.99 at Amazon and other distributors.
NOTE: Amazon has not updated the discounted price yet in the Amazon main store (.com).
Prices in the UK, Canada, Germany, France, Spain, Italy, and Japan
are all for sale with the correct reduced price.
But the Ebook IS FREE TODAY.
Here's an excerpt from Tales of a Texas Boy. This story has information I learned from my father about his father - my grandfather, Louis. He had quite an interesting life. As a veterinarian, he traveled to Mexico with Black Jack Pershing, and a few years later served in France as a veterinarian with Pershing again. 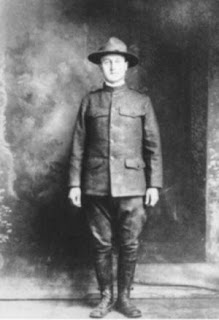 Amazon Kindle EbookLarge Print Paperback $7.99 at Amazon and other distributorsAudio Book  free if chosen as the first book when joining audible.comHow do you handle a crazy jackass? Eddie knows. If you ask Eddie, he'll tell you pigs can fly and show you where to find real mammoth bones. Take his word for it when he tells you always to bet on the bear. These are things he learned while dreaming of becoming a cowboy in West Texas during the Depression. Through Eddie, the hero of "Tales of a Texas Boy," we find that growing up is less about maturity and more about roping your dreams. Hold on tight. It's a bumpy ride. A wonderful read for anyone who enjoys books like "Little House on the Prairie" or "Tom Sawyer." A great bit of nostalgia for seniors, too.