A Little Nostalgia for Dads 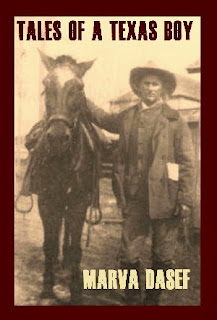 When my father was in his 80’s, he just happened to say, “Did I ever tell you about the cattle drive?”

Thanks, Dad (I actually called him Hon for Honey—long story). Wait until you’re hitting the down slope of life before you mention to your writer daughter you had something interesting to tell me about when you were a kid.

After a chat with light details based on his failing memory, I wrote “The Cattle Drive” starring my father when he was a kid growing up on a West Texas farm during the Depression Era.

What else might he have to say he hasn’t bothered to mention for the last few decades. As it turns out, quite a bit. A lot of it’s funny. After all, a person remembers the humorous event or odd character. Most of the stories also included farm and wild animals. Even better.

Eventually, I wrote a lot more stories to go with the original six or seven I got published in various zines and sites. He got a kick out of them and believed every word was absolutely true. Well, I had to make up a lot of the details, but they were more or less almost true tall tales.

Before he died, I put together 20 or so stories and put them into a single book titled “Tales of a Texas Boy.” I read the stories to him as I wrote for his comments and corrections. It occurred to me that I was reading the stories to him because he couldn’t read them himself. He was going blind with macular degeneration.

I decided that a large print paperback version of the book would appeal to other elders, particularly those with failing vision and/or who grew up in a rural environment.

Turns out the grandmas and grandpas did, indeed, want to read or listen to these stories about a pet bear, a flying pig, a stubborn jackass, skunks in a cornpatch, and lots more.

I thought since this is my blog, I’d let those who are interested know about Tales. They might have somebody in their life (or themselves) who’d like funny and sometimes sad stories.

So, here’s where you can find the book in ebook, print, large print, and audio formats.

How do you handle a crazy jackass? Eddie knows. If you ask Eddie, he'll tell you pigs can fly and show you where to find real mammoth bones. Take his word for it when he tells you always to bet on the bear. These are things he learned while dreaming of becoming a cowboy in West Texas during the Depression. Through Eddie, the hero of "Tales of a Texas Boy," we find that growing up is less about maturity and more about roping your dreams. Hold on tight. It's a bumpy ride.