ULTIMATE DUTY - Amazon A military officer must choose between her sworn duty or her rebellious blood ties. 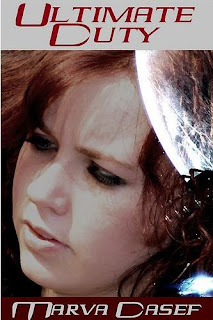 Excerpt R-RATED Nobody should read unless over 16 or accompanied by a parent.

Remy made herself comfortable sitting sideways on the bunk next to Cassie. They set the viewing console between them. “So, which do you recommend?”

Cassie scrolled through the vid list. “That’s good. That one too. Oh, oh! Here’s the best one.” She tapped the screen to select To Have and Have Not.
“What’s it about?”
“Man, woman, sex. You know, the usual. Oh, and it’s the one with the whistle line.”>
They settled with their backs against pillows to watch. The grainy black-and-white images puzzled Remy. “The color’s missing. And it’s two-dimensional.”
“Hush. It’s supposed to be that way. That’s why they called it film noir.”
Remy shook her head, but figured if she watched, she’d get used to the flat, gray-toned images. Cassie put her hand over Remy’s. Remy didn’t move her hand away. When the woman named Slim in the vid said the line about whistling, Cassie surprised Remy by leaning over and kissing her lightly on the lips. Cassie drew back and looked into Remy’s eyes, the question from her kiss continuing in her glance.
Remy considered the offer, then shrugged her shoulders and quirked her lips in a lopsided grin. “Why not?” she whispered, then leaned into Cassie, returning her kiss. Remy felt the softness of a woman’s lips, different from a man’s. Or at least different from Kiru’s butterfly touches and deep caresses. She wondered if she should be doing this? Was this right? The tingling in her belly said yes.
Cassie ran her hand under Remy’s shirt and cupped her breast, gently squeezing. When she ran a finger around her nipple, Remy gasped.
Momentarily confused, Remy didn’t know what she was supposed to do. With a man, it was obvious, immediate, primal. With another woman, the need felt different, yet somehow the same. Remy mirrored Cassie’s caresses, trusting her partner to guide her with her own actions. What made her feel good? It must be the same for Cassie.
She felt gentle fingers exploring her body. Remy’s thoughts flashed back to Kiru’s face, his touch, his masculine smell of sweat and cinnamon. Cassie smelled sweet, like lilacs—lovely, soft, and inviting. Remy cleared her mind, determined to learn and savor this new sensation wherever it led. She had to know where her feelings would take her, then she could be complete. She let Cassie lead her to that completeness.