With my granddaughters, no trickery is necessary. Haul out a camera and capture the perfect model for Faizah, a farmer's daughter called on by the goddess Anahita to lead the battle against Dev the god of war. Audrey wins the role for her dark beauty. Sorry, Janae, you're just too blond and Nordic for the role of a middle-eastern girl. I'll check around to see if anybody needs a Valkyrie for their book cover. I didn't end up with Audrey on the cover since I had an authentic page from an ancient middle-eastern text showing the elusive Simurgh.

TALES OF ABU NUWAS 2: Faizah's Destiny
(On sale at Smashwords for 99 cents) 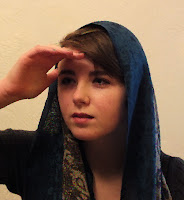 The gods are at war and only a farmer’s daughter can save the world from Armageddon.
The village magician has gone missing. His four pupils think he has left a clue to his whereabouts in the Magicalis Bestialis--the book of magical creatures. They must seek the help of the elusive Simurgh, the mythical birds who know all the secrets of the universe.

However, this is not an easy camping trip into the mountains. Spirits, gods, and demons confront the four friends, who are not aware they’re being set up by otherworldly forces for a much larger task.
A farmer’s daughter, Faizah is chosen to lead the humans in the battle. She must persuade a slave, an orphan, and a rich merchant’s son to join in the battle on the side of good. Although divided by Dev, the evil god of war, the teens must band together to find the Simurgh, rescue their teacher, and stave off Armageddon.

Email ThisBlogThis!Share to TwitterShare to FacebookShare to Pinterest
Labels: Faizah's Destiny, The Tales of Abu Nuwas

Sweet Tales for Mom - Give Her a Book for Mother's Day

Mother's Day is coming up on Sunday and you still have time to get her something nice. If your mom is in the same generation as my mom...