Quest for the Simurgh (Fre)Ebook 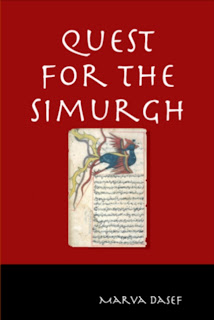 Quest for the Simurgh
by Marva Dasef
Free Ebook at Smashwords
Enter coupon code LE99P at checkout
The village magician, Wafa, has gone missing. His star pupil Faiza thinks he has left a clue for her on a page of the Magicalis Bestialis. With the page open and marked with an X, she believes Wafa is telling them to seek out the Simurgh, the mythical birds who possess all the knowledge of the universe. She convinces her three classmates that they must seek the help of the Simurgh to find their teacher.
She leads the boys on a difficult journey into the mountains in search of the elusive birds. A strange little man becomes their guide. However, they do not know he is a spirit leading them toward a battle between good and evil. Spirits, gods, and demons confront the four friends, who are being set up by the otherworldly forces for a much larger task than finding their teacher. The students were chosen to take sides in the battle which might spell the end of the world: a battle between the demons and the spirits.