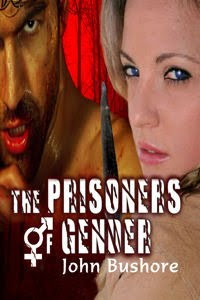 Prisoners of Gender
by John Bushore
Buy the trade paperback at Amazon for $9.95
Buy the ebook at Eternal Press $6.95
First off a disclaimer. I am not a regular reader of "spicy" literature. I write kids' books and I generally like to remain pure of heart (quit laughing, you people who know me!).
When John Bushore asked if I'd read "Prisoners of Gender" and I'd seen an excerpt, I enthusiastically agreed.
I'm not sorry. Hey, John! You're a hot guy! No MonkeyJohn kiddie books here for sure.
This is a wonderful fantasy, sexy, fun read.
Princess Marissa and gallant soldier Bardak are the victims of a badly handled curse. They switch bodies and have to learn to live with a huge change in their lives, all the while seeking the nasty Wizard who could make them swap back to their original bodies.
Marissa starts to like the rugged, strong, sexy male body she now occupies. Bardak is torn. He has sworn to protect the Princess, but the Princess is now in two places. Not only is he wearing her body, he has to also protect the mighty warrior occupied by the princess. Confusion ensues.


Well, you can see where the title comes from. As the two learn how to deal with their decidedly different circumstances, they bicker while being mightily attracted to their own bodies worn by the other person. I was reminded of Katharine Hepburn and Spencer Tracy arguing it out in the 40's comedies which (way ahead of their time) showed gender prejudice for what it was--a stupid set of societal rules. Unfortunately, there are countries that still think along the lines of weaker-stronger sex.
John has shown this to be the false piece of lies that every feminist has known for years. His handling of Bardak in Marissa's body and Marissa in Bardak's shows his sensitivity to both sides of the physical spectrum.

Now, this is also a somewhat epic fantasy, which I define as set in an alternate fantasy world unrelated to the world in which we live. I say 'somewhat' only because the book is not 200,000 words long with way too many mighty thews. I'm not a fan of epic, so I really enjoyed John's take on the fully fantasy world that epic's usually inhabit.


The writing is crisp and fast-moving. "Prisoners" is a fun romp and a good fantasy book, too.
Stars? Hey, on a five-star scale, I'd give this one 4-1/2 at least.