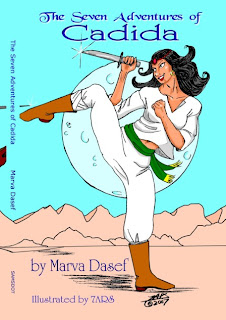 Do you ever get tired of the same old fairies (fey), dragons, norse gods, greek gods, roman gods?
I try to find stuff that's not completely shopworn. Yeah, I do use some of the good old standards, but I also try to bend and twist them a bit. Other writers more famous than me do the same. Otherwise, nothing would ever be fresh and new. Sometimes I disagree with certain re-interpretations, but I appreciate that they're trying to change it up.
I thought I'd post some tidbits of mythologies that I've used in my books.

The Seven Adventures of Cadida
Throughout the seven (that's a magic number, you know) tales, I've tossed together a mixed salad of middle-eastern mythologies and just some plain old nonsense. However, things I have appropriated from the real mythologies include:
Azhi Dahaka
From Encyclopedia Mythica:

My Mashup:
The Great Vizier (now entombed, waiting for something interesting to happen) had used Azhi Dahaka's blood to create a flying, fire-breathing horse. Excellent for combat, I'd imagine. Unfortunately, the Franken-Horse could only levitate a few inches and puff a wimpy flame when startled. However, Azhi escapes his imprisonment (see above) and knows this horse named Baakir is his umpteen times grandson and wants to find him.
Our erstwhile heroine, Cadida, tries to protect Baakir from the dragon only to learn that Azhi just wants a family reunion.
Azhi is mentioned in "Cadida and the Sultan's Horse - Horsing Around" and "Cadida and the Dragon Demon - Blood is Thicker."
More to come:
The Kazikli Bey
Bascoda the Djinn
The Kraken
Poseidon
Amphitrite
Merfolk
Read all the stories in The Seven Adventures of Cadida. Purchase at The Genre Mall or give me a shout out for a copy.