Advice on Writing a Series

“AND THEN WHAT HAPPENED?”

There are two ways to write a series:
For those of you who opt for option one, you better find somebody experienced in this multi-book planning ‛cause I ain’t it.

If you hit the payoff end of book 1 and keep writing, stop whatever you’re doing. Type THE END where book 1 naturally ends, open a new file, and take all the stuff you jammed at the end of book 1 and put into book 2.

HOW DO YOU KNOW WHEN TO STOP

If you’re a diligent newbie writer, you’ve purchased (or checked out of your library) a few books on writing: how to write novels, how to write scenes, how to write romances, how to write memoirs, etc. Now, look back a few words and note the word “scenes.” That’s key to a series. A series book is one big giant scene. There may be other scenes to follow that biggie, but don’t go there unless you’re James Mitchener’s reincarnation and plan to write the entire history of the world in a single volume.

The elements of a BIG scene (e.g., an entire book) are the same as scenes within chapters, and chapters within books.

A standalone book has beginning, middle, and end (sunset, fade to black, happily ever after).

A series book has beginning, middle, and end with a transition setting up the next BIG scene (e.g., the second book).

You may not know you’re writing a series when you start out, but you should have a good feel whether there is more. You can imagine a reader saying, “And then what happened?”

WHAT I ABSOLUTELY, POSITIVELY HATE ABOUT (SOME) SERIES

You might be merrily reading along, enjoying the tale, admiring the writer’s skill (not too many typos), and prepping yourself for the big payoff at the end. But when you get to the end, there is no payoff. You’re left frozen in time. The villain holding the sharp blade sneaking up behind the hero, he brings the blade up and is just about to strike and.....nothing. The writer figured you’d be so enthralled with finding out what happens next that they’ll surely buy your next book.

Nuh uh. The only time this is a valid ending is if you’re in the 1950’s, munching popcorn in the first row watching another episode of Buck Rogers. A cliffhanger is all well and good if you know going into the deal, and you’ve laid down your quarter to enter the theater that Buck most likely won’t get knifed by the villain, and you’re perfectly okay to come back next week to see how said villain is thwarted.

Thing is, that movie house is also offering a feature film with a beginning, middle, and end. That’s why you paid your quarter to be satisfied by an ending that naturally progressed throughout the narrative.

WHY SHOULD YOU CARE?

You should care because you’ve pissed me off. Yeah, I’m just one person, so my opinion doesn’t matter. That’s entirely true. But do you really believe I’m the one and ONLY person in the entire world that holds that opinion? You’re sadly mistaken. I’m special, but not that special. If I think that way, then a whole lot of people—potential buyers—think the same. You’ve just lost your audience.

Think about your own life. You live your life in stages. The end of one stage suggests the next, but the next stage is its own part of your life. Sometimes, your life takes a surprising turn. You were headed toward point A, but somehow or other events led you to point B instead. If you could map out your whole life (or, say, your parents could do it for you), you and everybody around you would be bored silly.

So, transitions can be smooth:

You graduate from high school and continue on to the college where you had applied to become a rocket scientist.

You graduate high school, but you met this guy in the summer and he’s part of a biker gang, which you thought totally cool, so you blew off college and rode the back seat of a Harley across the country.

In either case, the graduation from High School is the natural ending point of that stage. But if you’re sneakily planning to write a series, you briefly mention admiring the black leather jacket on that dude who rode by the graduation ceremony on his Harley. You lock eyes with him. He grins and winks. You feel a little tingly, but shake it off to march into the next phase.

Uh, oh. We’re planning a series, right? Well, you might pack all your bags, have a going away party, and even start the drive to your college of choice. You spot the dude on the Harley as you pass by the diner, but you just drive on.

CUT, WRAP, AND PUT A FORK IN IT

But you now have a satisfying end to book 1 with a hint of the events of book 2, but you’re not leaving in the middle with the villain stabbing the hero in the back. You (the main character here, of course) may just keep on driving to college. That could be another book in the series. Or you could pull a U-turn in the road and head back to, um, grab a burger at the diner. Yeah, a burger and a handful of tight jeans.

A fork in the road can act as a transition between books in a series. At the end of book 1, you present some possibilities, but you have ended this stage (or book). Book 2 picks up with one of the forks you have offered in book 1.

Obligatory Graphic So References in Social Media Have a Picture to Make It More Interesting
and Everybody Loves Cats. This is Dusty. He only reads catfood can labels. 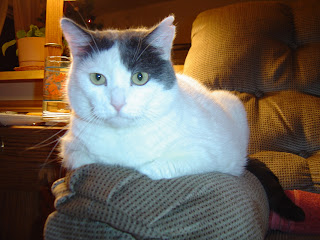 Email ThisBlogThis!Share to TwitterShare to FacebookShare to Pinterest
Labels: Writing a Series