Winnie Krapski's back with another hilarious tale of her adventures in the Call on the Dead Club. This is the 3rd story in the series. Check Lorrie Struiff's blog for links to all her books. 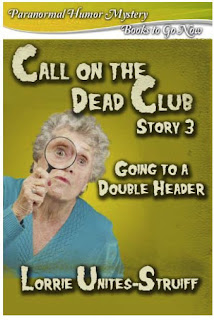 C.O.D. Club - Double Header
by Lorrie Unites-Struiff
Buy at Amazon for only 99 cents!

Mr. and Mrs. Bickerson are in a fatal highway accident. Both Phil and Winnie work their last requests. Strange that the dead couple want their requests kept secret from one another. Why? What are they hiding?

Winnie works the request and ends up in more danger than she can handle.

Morty Slovik, the mortician-owner who lived across the street, watched us through his bay window. We waved at him. After we made a mess of his funeral parlor the last time we were here, I had to ‘fess up to him about the COD Club’s mission. Don’t know why he’d been a bit spooked about it. I mean, he worked with bodies all the time. Or, maybe he felt weird knowing they were watching him.

Now, he was used to seeing me at his funeral home, as this was my usual place to deal with ghosties, and unlocked the door early when bodies were laid-out. We entered the home. The harsh tones of arguing floated down the long hallway before we reached the largest viewing room. I nudged Phil. “They sure are living up to their name Bickerson.”

“Yeah, let’s just go in and sit. Pretend we don’t hear or see them. Maybe we’ll find out what the fuss is about.”

We slipped around the corner and sat on the soft velvet chairs that lined the room. A jungle of flowers flanked the two coffins against the back wall. We kept our faces blank.

The ghosties stood toe-to-toe in front of their caskets. Mrs. Bickerson, a thickset woman with dyed red hair, wore a black pantsuit. Hubby was chubby in his gray suit and continuously smoothed his beard. They hadn’t noticed us coming in; they were too busy running their mouths.

“Told you not to pass that semi on the two-lane road. But no, not you. You had to play chicken with a tanker,” the woman shouted.

“If you wouldn’t nag nonstop, I’d have never pushed the pedal. I figured the quicker we got to the college, the sooner I’d get away from your flapping mouth. So, it’s really your fault.”

She poked him in the chest. “The twins’ll know it’s your fault.”

“How? You gonna tell Donny and Ronny that?” He crossed his arms and smirked.

Her head bowed and her eyes filled with tears. “Oh, dear. What are the boys going to do without me?”

“Probably be happy without you checking up on them every weekend and giving them the third degree.”

She stomped her foot. “You are sooo cruel.”

“You’re no sweetie-pie either.”

The woman’s chin snapped up. “Is that your flimsy excuse for cheating on me?”

He threw his hands up and shouted. “How many times I gotta tell you, I ain’t seeing anyone.”

My nose tickled. I tried to hold back, but the sneeze erupted like a shot. The startled couple turned and looked at us then headed our way.

He eyed us up and down. “Who are they? You know them?”

“No. The woman looks a little familiar though.” The Missus crossed her arms and tilted her head. “Weird looking couple.”

I peeked at Phil. He wore this silly grin, and his round belly covered half of his lap. Definitely Ollie. But me, Laurel? I looked down at my thin legs clad in denim jeans. When I caught myself twiddling my fingers, I quickly shoved them in my coat pockets.

The woman stood in front of me, studying us. “All the man needs is a wooly caterpillar under his nose, and this ridiculous woman with the jeans and terrible gauche hat could use a few lessons on how to dress.”

That did it. I stood, and Phil yanked me back so hard, my feet bounced up from the floor.
The woman covered her mouth, giggling hysterically. “Look at those ridiculous sneakers.”
I pushed to my feet again. Phil tugged on my sleeve. “Winnie, sit down.”

“I will not. I’ve had just about enough. It’s fine and dandy for Stubs and Chubs to verbally beat each other up, but I don’t have to take their insults.”

Their eyes widened, the woman screamed, and both backed up to the caskets.

“You can see us?” The man’s eyebrows shot up.

“No kidding.” I moved toward them. “What gave you eggheads the first clue?”

Email ThisBlogThis!Share to TwitterShare to FacebookShare to Pinterest
Labels: Call on the Dead Club, Lorrie Unites-Struiff