I chose to use time travel in A Step Sideways because I needed the main character to have a chance to experience what it was like to be in control of his life and strong enough mentally and physically to protect himself and those he loves. By having Gort, the abused boy from Laurel's Miracle, go back in time in the company of the crystal stallion he bonded with at the end of Laurel's Miracle and find he is one of King Arthur's knights gave him that opportunity. It also gave him the chance to make a courageous decision near the end of the book as he hovers in the misty veil between the worlds. I believe in reincarnation and that the threads of our lives are intertwined with many of the same people from life to life. Each pattern or life being different but related in some way. The use of time travel lets me explore that as well.

About the Book
Legend says that land once stretched from Lands End in Cornwall as far as the Scillies Islands thirty miles out in the Atlantic. To this mythical land Gort Treliving escapes to avoid the pain inflicted by his abusive uncle. He steps away from his corporeal body and walks into the mist of oblivion, seeking only to find peace. To Gort’s surprise he finds he is one of King Arthur’s knights, Sir Gawain. He is also the partner of a wonderful grey war stallion who can telepathically speak to him. 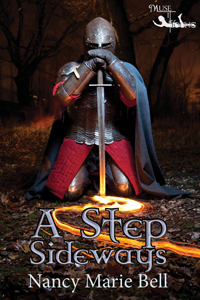 While he is caught up in a wild chase across the countryside to rescue King Arthur’s kidnapped queen and her lady, Gort as Gawain, tries to puzzle out the strange visions of another life that assail him at the most inopportune times.

There is intrigue, mystery, sword play and a dash of romance. A Step Sideways is a rollicking romp of an adventure that borrows inspiration from the Arthurian legends with a decidedly quirky cast of supporting characters.

After the last page the characters will linger in your mind and you’ll wonder what happened next.

Gort Treliving steps from his body into the mist of oblivion to escape the pain inflicted by his abusive uncle. He finds he is one of King Arthur’s knights.

While chasing Arthur’s kidnapped queen, Gort must puzzle out the visions of another life that assail him at the most inopportune times.

Gort lost count of the number times Uncle Daniel hit him in the face, his eyes refused to focus and his face felt numb from the hard slaps. Uncle Daniel threw him against the wall of the shed and then kneeled on Gort’s legs when he slid to the ground. Gort didn’t know how long Uncle Daniel beat on him, his body was one great pain and still Daniel continued to land blows on his head and his stomach and his back when Gort tried to curl up and protect his head.

“Set the law on me will you. Get some fancy lawyer to take away the money that’s rightfully mine and give it to that auld biddy Emily.” Uncle Daniel punctuated each accusation with another blow.

Gort finally just let himself slip into the comforting darkness where Uncle Daniel and the pain in his body couldn’t follow him. Safe in the encompassing darkness Gort reached up his searching hand and found his fingers entangled in the crystal strands of GogMagog’s mane.

“Thank the gods, you’re here Gog,” Gort’s voice trembled and he choked on his tears.

“I would have come sooner, but I was a long ways away,” Gog’s warm breath sent hope and strength coursing through Gort’s cold body.

“Come with me for awhile, leave what is for a time and travel with me to what was once,” GogMagog entreated Gort.

“Lead me to it.” Gort staggered to his feet and leaned on the warm crystalline shoulder of the great stallion. Without a backward glance Gort walked away from the pathetic heap of clothes and blood that Uncle Daniel was still beating on.

The farther Gort walked away from the dank little shed and Uncle Daniel’s rage the better he felt. The pain faded from his limbs and strength flowed outward from the warmth that grew in his chest. GogMagog, the great crystal stallion whose home was the caverns under the Glastonbury Tor, paced beside him. Rainbows of light flickered around the stallion and encompassed Gort in their radiance as well. Gort’s steps became firmer and steadier as a golden peace flowed through him. Gort felt his back straighten and a smile broke across his face when Gog curved his huge head back toward him and lipped his ear.

The darkness grew opaque and finally faded into a pearly grey, a diffuse nebulous light filled the sky above Gort. He tipped his head back and was startled to see the ghostly shape of gulls winging through the mist. The stallion stopped and shook the moisture from his sleek body, Gort laid his hand on the thick neck and then pulled his hand back quickly and held if in front of his eyes. Slowly, Gort waggled his fingers and looked in amazement as the large callused hand in front of him flexed its fingers. He turned and looked GogMagog in the eye and was further amazed that he could look him straight in the eye without looking up.

“What happened to me,” Gort’s voice sounded two tones deeper than he remembered.

“You are as you were once,” GogMagog said solemnly.

“Who am I supposed to be, though,” Gort fought down the panic rising in his throat.

“You are who you have always been,” Gog touched Gort gently with his muzzle. 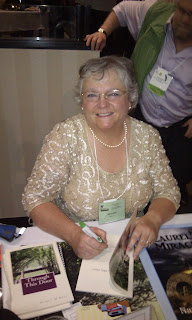 Nancy Marie Bell lives near Balzac, Alberta with her husband and various critters. She is a member of The Writers Union of Canada and the Writers Guild of Alberta. She enjoys writing poetry and fiction and non-fiction. Nancy is an editor with MuseItUp Publishing Inc.