While my Oregon-based murder mystery with amateur female sleuth is happily ebooked with MuseItUp Publishing, I've decided to go with the print edition myself. The main reason is that I've learned over the last couple of years, ebook is becoming predominant over print. But, there are plenty of people who still prefer to hold that paper in their hands.

For them, I have provided printed books at the lowest price I can sell the book and still make a small profit. That's fair, right? Here's the cover and blurb to get started. Throughout the next few weeks, I'll put up some additional posts with articles about the book and excerpts to illustrate its wonderfulness 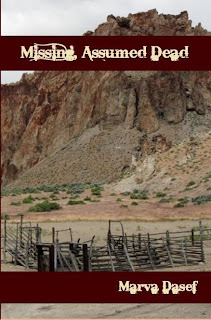 MISSING, ASSUMED DEAD
Now in Print at Amazon  and discounted to $6.48
Available in Ebook from MuseItUp Publishing