Why would books based on middle-eastern myth be appropriate for a Christmas present? First, let's just change that "Christmas" to "Holiday."

Because any book is a great gift, and  my middle-eastern books are far more Disney than bin Laden.

Before Mohammad, the Aramaic people had a variety of religions. Within these religions, a pantheon of gods were worshiped, placated, begged of, and permeated the hearts and minds of those who lived in Persia, Mesopotamia, Canaan, Sumeria, Phrygia, Egypt (the most consistent of kingdom names), and many more which rose and fell.

Two of my books, I consider to be my middle-eastern cycle. Will there be more to come? It all depends on whether you, dear reader, let me know it's worth my time to continue. How will I know that? First, you could buy the books in ebook or print format. Second, you could review the books you have read (whether getting them free or by purchase). Third, you could tell me here, on Google+, Facebook, Twitter, or by email whether I should or not.

While researching various mythologies, I was reminded of Scheherazade's 1001 Arabian Nights.  I liked the idea of the frame story to contain the seven adventures of a girl named Setara. I wanted a story teller sitting in an ancient bazaar telling tales for a few coins. I discovered the poet Abu Nuwas and borrowed his persona to be my storyteller.

The frame story contained the telling of the seven adventures of the adventurous girl and her genie. I'd made up my original character names, but I now wanted them all to have proper middle-eastern names. Thus, my original Cadida became Setara, Bascoda the djinn became Basit, and so on.

This compilation became "The Tales of Abu Nuwas - Setara's Genie." Available in print and ebook.

Since I had some left over demons and deities, I wrote another novella based on middle-eastern mythology. It became "Quest for the Simurgh - Faizah's Destiny." Also available in print and ebook. 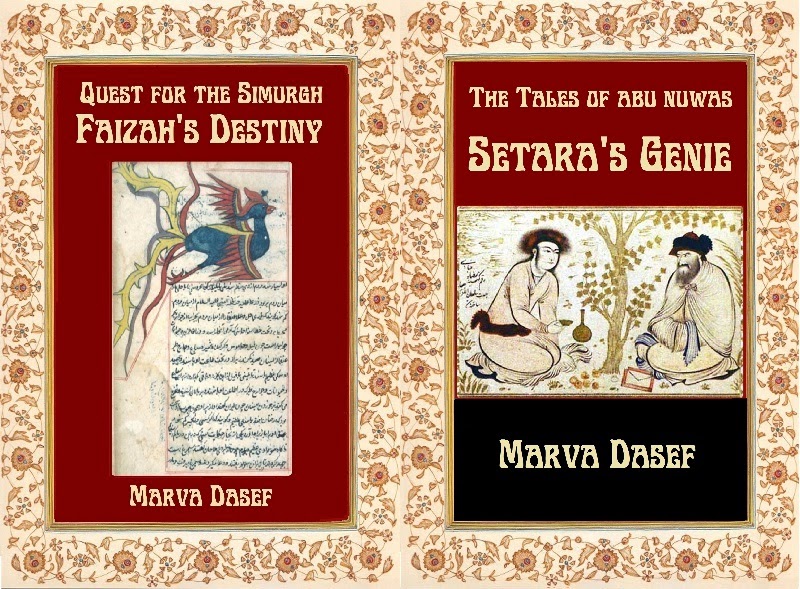