What Time is It? Demon Time 2

Encyclopedia Mythica has plenty to say about Persian mythology. The three demons in "Faizah's Destiny" are minions of Dev, the war god. 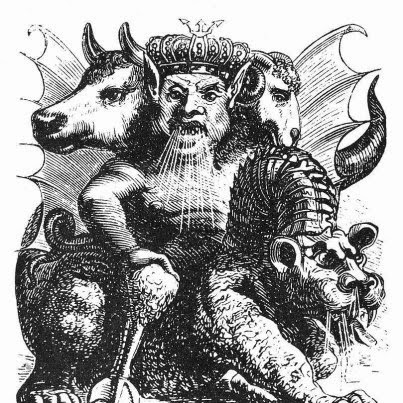 Aesma is the demon of lust and anger, wrath and revenge. His wrath is mainly directed towards the cow (go figure). He is the symbol of violence, a lover of conflict and war. He's resting on his laurels these days since war just seems to keep going from inertia.


Buyasta is an ancient Persian demon of laziness who tries to prevent people from working. He's even lazier than usual lately since plenty of people are out of work without his help.

Nanghaithya An archfiend, which is a demonic upgrade. Nanghaithya is busy making people discontented. It seems that this guy has plenty of work in this downturn economy.

Dev (the little devil) wants a war to usher in Armageddon. Why? Because war is his thing and wiping out all humankind is on his to-do list.

To that end, he sends three daevas (demons, if you will) to turn Faizah’s companions on the quest to the dark side (sort of a Darth Vader thing).

Aesma appears to Parvaiz in the form of a bear with a serpent’s tail. Parvaiz was a slave and has a mile-wide chip on his shoulder. Aesma fuels that anger and convinces Parvaiz that the others are his enemies, not his friends. He’s told to wait for Dev to call him into battle. And, of course, keep his mouth shut about the little meeting.

Dev sends Buyasta in the form of a giant spider to Bahaar, who has always dreamt of becoming a warrior. The demon takes advantage of that dream to make Bahaar fall asleep (laziness) and dream of himself as a mighty fighter in a huge battle. The good part: Bahaar is kicking major butt. The bad part: The butts he’s kicking are those of his best friends.

Nanghaithya has a little un-pep talk (he’s a voice-over character) with Harib claiming that his friends all laugh at him and only keep his company because his father is rich. The demon attempts to make Harib discontented with his relationship with the others. Harib, however, is having none of it. He’s the only one of the three boys who stays true to Faizah.

Who's your personal demon? For writers, it seems Buyasta (sloth) and Nanghaithya (insecurity) have alternating work schedules. Hopefully, the seesaw demons don't turn an author to Aesma (anger).

TALES OF ABU NUWAS 2 - FAIZAH'S DESTINY
The gods are at war and only a farmer’s daughter can save the world from Armageddon.
Buy on Amazon: Faizah's Destiny