The four teen adventurers in "Tales of Abu Nuwas 2 - Faizah’s Destiny” are all students of the village magician, who also serves as teacher for the children who have some time to expend on schooling. Master Wafai is an all-round teacher, covering the academic topics such as mathematics and writing. As a magician with minor skills, he also loves to impart his knowledge of magical beasts that roam the earth.
* * * 99 cents on Amazon and Smashwords ***
Master Wafai wants more than anything to meet the elusive, all-knowing Simurgh. He feels it’s very important for his students to learn about magic, even though there is very little to be found around their tiny village. Of the Simurgh, he says:

“The Simurgh is a tutelary creature. It is so old, according to legend, it has seen the world destroyed three times over. Many believe it has learned so much that it possesses the knowledge of all the ages―a great teacher and a guardian. The Simurgh simply are. In the past for all of eternity and in the future for all of eternity.” 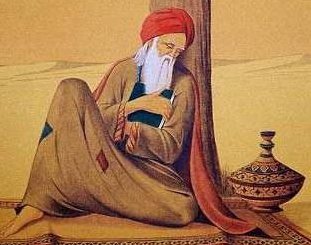 Bahaar, too, lived mostly on his own. Although an indifferent student, he preferred staying in Wafai’s classroom with his friends to begging in the streets. Still, he had his strengths―the fastest runner in the village, he could easily outdistance the bullies, but his bravado made him face them instead.

Faizah neared the age when Wafai would reluctantly release her to help take care of her father’s household, although he knew the girl really wanted to continue her education. He thought it most unfair that just because she was a girl, her parents expected her to stay home and help raise her younger siblings. Soon, it would be time for her to marry and have children of her own.

With her almond eyes and long dark hair, she was pretty enough to attract a prince, but with her parents’ low standing, the best she could do would be to marry a merchant. Particularly sad, Wafai thought, because of his three students, Faizah was the only one with a real talent for magic.

This talent provided the reason she was still in school. The herbs and simple cures she had already learned from Wafai earned a few extra coins for her family, so her parents considered Wafai’s classroom a better use of her time than doing laundry...for now. All too soon, they would take her out of his school and marry her off to some merchant or farmer.

TALES OF ABU NUWAS 2 - FAIZAH'S DESTINY (Kindle)
(Smashwords in all ebook formats)
The gods are at war and only a farmer’s daughter can save the world from Armageddon.