Most people I know heard I had open heart surgery on December 7th (Pearl Harbor Day). Actually, I had open chest surgery. No cutting into my heart occurred.

But, three things were fixed since I was conveniently sliced open. I thought they're interesting since each booboo was independent of the others. What would have happened if I had only one or even two of these conditions? I'd probably be on that infamous "watchful waiting" list from which people are too often excised by dropping dead while being watched.

Lucky for me, I hit the magical trifecta, so hacking and slashing commenced sooner rather than later. Kind of bollixes up holiday celebrations. On the other hand, my mom feels like crap and is certain each day is her last. She's not too interested in celebrations, so it worked out. Our youngest son, Mark, came to visit for a few days. Since we seldom see him, it was a nice surprise. On the other hand, boy is he a pushy bastard! His pushiness coming out in forms such as, "Don't you pick that up! I'll do it." "Sit down, I'll get you your juice." "I'll make your blanket fort (really)."

Back to the trifecta of heartfelt flaws. I've included my doctor's sketch for reference. 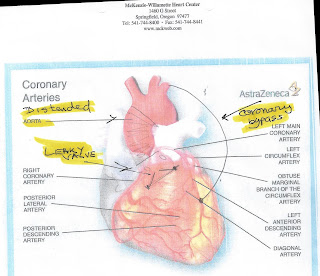 
* Technician ultrasounds the heart to get the baseline. Victim (patient), then walks a treadmill to bring the heart rate up to the calculated amount for the person's height and weight (maybe age, too). Then, they ultrasound again to make out the differences, etc.

I didn't get past the first ultrasound. The tech kept on and on taking shots from many angles, leaving the room, returning, torturing my poor left breast to the point I broke into tears. If I wasn't more or less tied down, I would have made every attempt to deck him. Having observed my mother going through this procedure, it was clear the tech was either the worst one in the entire world, or he was seeing something that shouldn't be there. A whole troop of people come in and said, "we've called an ambulance to take you to the ER." I say, "I can drive over. My car is right outside." You can guess how well that worked. Anyway, I got my first ambulance ride of my life and I felt just fine. I was embarrassed I was somehow causing this total waste of time and money.
At the ER, a bunch of other scans, Xrays, etc. plus way too much time trying to be comfortable for several hours.

Yup, I had a 4.7cm aneurysm in my ascending aorta. Guess when they operate? 5.0cm. Watchful waiting commences.

2 Arterial blockage. I got an appointment for an angiogram. It's a little more complicated than a CT scan or ultrasound. You have to get to the hospital at an ugly time in the am, put on a gown, get lots of this-and-that checks, get slightly sedated, get wheeled into a meat locker (the operating room is colder than hell), have the doctor attempt to introduce a line through my right wrist (this is to put dye into the system). Failing that, I got a hole poked into an artery in my groin. Yes, women also have groins.

Then lots of pictures are taken using xrays. They're taken at every possible angle. This deep dive confirmed the size of the aneurysm, but also showed an artery blockage, and booboo #3.

3 Leaky valve. This isn't uncommon and it can be repaired with keyhole surgery which is great since you're all better in a couple of hours. 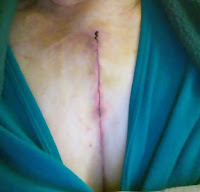 So, the trifecta of conditions called for soon, if not immediate, surgery. I chose to have it sooner rather than later since healing time is a couple of months at least, and I'd still have some cardiac rehab to go through.

I also have a very important wedding to attend in February. My eldest son (the producer of granddaughters we worship, so he gets a pass for a lot of other stuff) has found the love of his (later) life, Elizabeth Di Santo. Anyone who can hogtie that playboy deserves everybody's admiration and respect.

So, there you have it. Why I recently got a broken (then repaired) heart. I also got this lovely scar for my memory book.

Email ThisBlogThis!Share to TwitterShare to FacebookShare to Pinterest
Labels: Surgery