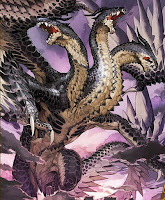 Aži Dahaka is the source of the modern Persian word azhdaha or ezhdeha (Middle Persian Azdahag) meaning "dragon", often used of a dragon depicted upon a banner of war.

Azhi Dahaka was created by Angra Mainu (the son of Angra Mainu and Autak), or the Ultimate Evil, to oppose goodness and truth (Allan, et al., 1999). Literally made of the unclean khrafstra, animals such as snakes, toads, scorpions, frogs and lizards, this dragon embodied corruption.

In the Avesta, the Azhi Dahaka is described as a three-headed, six-eyed, dragon-like monster. He is said to have a thousand senses, and to bleed snakes, scorpions, and other venomous creatures. He also is said to bring or control storms and disease. His wings were said to be so enormous that they would block out the sun.

In the Shahnameh written around 1000 AD, Azhi Dahaka was semi-anthropomorphosized as Zahak or Zohak, though many of the older characteristics were retained in the new version.

TALES OF ABU NUWAS 1 - SETARA'S GENIE
A girl, a genie, a few demons. Would could go wrong?