Halloween is for Fearless Vampire Hunters 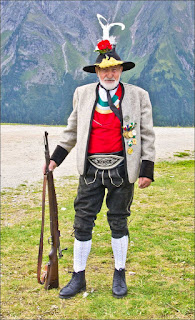 You can't have vampires without somebody thinking they need to be hunted. In Blood Ties Tested, the hunters consist of the team of Liebchen the Lundehund (no, really! it's a real dog) and a descendant of Bram Stoker's vampire hunter, Van Helsing.

Helsing is a distant relative of the famous Van Helsing who took on Dracula in Bram Stoker's seminal work. He isn't the brightest bulb on the tree, but desperately wants to make a name for himself as a vampire hunter to follow in his ancestor's footsteps.

He does have a secret weapon at his disposal: Liebchen the Lundehund. The Norwegian Lundehunds have six toes on each foot that allow them to climb on vertical cliffs and their neck joints enable them to bend their head backward over their shoulders so that their forehead touches its back. 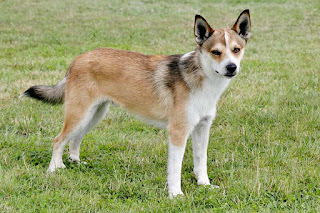 The hound can also close their ear canals at will (to protect them against dirt and moisture) and are able to bend their head 180 degrees backwards over their shoulders. Their fore-shoulder joints are extremely flexible and empower both front legs to be stretched straight out to both sides, for greater ease in swimming and maneuvering in the narrow crevices in Norwegian seaside cliffs where their avian prey lives.

The dog, for all its traits and talents, has a flaw of its digestive tract which requires an almost 100% protein diet. Thus sensitized to detect protein sources, the Lundehund is ideal for seeking out creatures which also require high protein foods, such as vampires. Blood calories are almost all protein. It does contain a high salt and iron content, which might be detrimental to humans, but vampire and Lundehund physiology can counteract the potential poisons.

Ivan Helsing stood with hands on hips. A frown contort his features. “Var ist das hunde?” huffed out a disgusted breath. “Ach! I take mein eyes off her for one minute and off she goes mitout a tot in her brain.”

He lifted the binoculars to his eyes and scanned the tree line of the thick forest. “Dark soon. Der wampires should be coming out any time.”

Finally spotting his dog trotting back through the underbrush, Helsing lowered the binoculars. “She vill find da wampires.” He sat on a rocky outcropping and slapped his thigh. “Liebchen, come.” The small brown and white dog raced over to Helsing and sat, her tongue lolling, and her tail whipping side to side. “Ist she a gut girl? Ya, she ist.” He patted the dog between her overly large pointed ears.

The vampire hunter sighed. “Dat gypsy woman said da wampires live in these woods, but dere ist no sign of anyting here.” He scanned the treetops below him again. Liebchen followed suit, her head turning 180 degrees to look back over her body toward the woods.

The lundehund was a lucky find for Helsing. Liebchen was just the dog he needed to track down the bloodsuckers. Without her, he’d never find the vampires on is own. He wondered if his great-uncle Abraham Van Helsing had some wizardly way to hunt vampires. Ivan had inherited his great-uncle’s Vampire Killing Kit, but hadn’t caught any vampires to practice with it. Still, he wanted to be the Helsing family’s next heroic monster hunter.

Liebchen was almost magical. Her large ears picked up sounds as aptly as any other dog’s nose picked up scents. The lundehund was bred to hunt puffins on the rocky shores of Norway. Most dogs would have to shake their heads to clear out the seawater. The lundehund just shut its ears.

Her special secret was a strange genetic flaw. A lundehund needs a very high protein diet. No veggies for them. Straight meat, raw from the butcher shop. Fortunately, dried meat was a viable substitute along with LundePup dog food made with animal blood to provide the specific enzymes required to keep Liebchen healthy and happy.

The reason this genetic defect was a strength is that a lundehund could sniff out vampires who happened to have an almost identical genetic flaw. Takes one to know one.

Helsing and Liebchen sat on the hill trying to make out any hint of a vampire presence. The dog scanned the entire forest with her handy 180-degree view, but it was her nose doing most of the work. She did not scent a vampire, or she’d let Helsing know.

The binoculars provided Helsing a close-up view. Something appeared behind a particularly tall stand of trees. At first, Helsing thought it was just another rocky outcropping like the one they sat on. As he stared, more of a pattern emerged, an unnatural pattern of stone. Could this be the vampires’ hideout?

He began picking his way down the hillock’s grassy rock-strewn slope. Liebchen, still on the job, bounced left and right around the boulders, running one way a few yards, then zigzagging down the hill.

A half an hour and two scraped palms for Helsing later, the two had made their way to the stone building. Helsing slammed his pack on the ground and grunted. It was nothing but a crumbling abandoned abbey. The four walls were decaying in several places and there was no roof. Grinding his teeth, Helsing shook his head. “One more dead end, Liebchen.” He picked up his pack and turned to hike back to their viewpoint. Then he noticed Liebchen had not moved but was standing still with her nose wrinkling and un-wrinkling as she sucked the smells into her sensitive olfactory organs.

“What ist? Do you smell someting? A wampire maybe?”

Email ThisBlogThis!Share to TwitterShare to FacebookShare to Pinterest
Labels: Halloween is for Vampire Hunters