Most of my books on Smashwords provide multiple formats other than Kindle. See everything I have to offer on my Smashwords Author page. 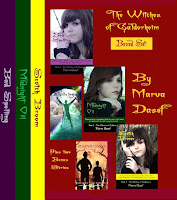 Witches of Galdorheim Series:
Bad Spelling (Book 1)
A klutzy witch, a shaman's curse, a quest to save her family. Can Kat find her magic in time?

Midnight Oil (Book 2)
Shipwrecked on a legendary island, how can a witch rescue her boyfriend if she can’t even phone home?

Scotch Broom (Book 3)
A magical trip to Stonehenge lands a witch in the Otherworld where an ancient goddess is up to no good.

Blood Ties Tested (Book 4)
Unfortunate events lead a half vampire boy into indulging his vampire side, leaving him with regret and sadness. Can dear old Dad help him forgive himself?

Spellslinger (Prequel Short Story)
What does a teenage half-warlock, half-vampire do to have fun? Why build an old west town on a glacier in the Arctic?

Tales of Abu Nuwas Series:
Setara's Genie
A girl, a genie, a few demons. What could go wrong?

Faizah's Destiny
The gods are at war and only a farmer’s daughter can save the world from Armageddon.

Science Fiction:
Ultimate Duty (Adult) and First Duty (YA)
A military officer must choose between her sworn duty or her rebellious blood ties.

Mixed Bag and Mixed Bag 2: Supersized
Collections of short stories. SF, Fantasy, Mystery, Humor--a little something for everyone. MB2 contains all the stories in Mixed Bag plus a bunch more.
Lemons and Other Kids Tales - Children's Animal Stories