Be Careful of Your Spelling

What is a rune? Besides my second most important character in the Witches of Galdorheim series, that is. Briefly, runes make up the oldest Norse alphabet. Yes, those Vikings were busy writers as well as raiders and looters. The Eddas are Norse adventure novels (okay, they’re generally written in poetry form). But well-known books such as Beowulf weren’t written in runes. Believe it or not, Beowulf was written in Old English, not Old Norse. Or maybe that’s the only translation that lasted through the centuries.

Many fantasy novels based on Euro-centric mythologies use runes in their plots, be it a tattooed rune on the hero’s chest, the discovery of a runic tablet that leads a worthy band of heros on a quest for dragon’s gold, or a villain who casts his dark spells in the ancient runic language. All very cool stuff.

Runes are not just fantasy made up by Tolkien. I researched runes and found a few I could use to give some depth to the magical language of the witches.

Elder Futhark is the oldest known runic alphabet. Each rune has a name. Each rune is also a word of power. The Rune markings in the graphic (see below) match the interpreted Elder Futhark (the Runes in spoken form) shown in the excerpt. The name of the language comes from the first six letters that make up the Runic alphabet. 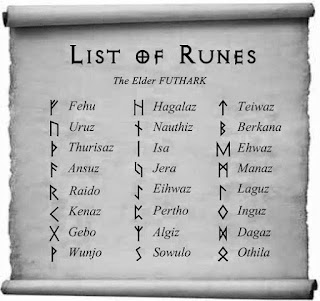 In one sense, Futhark is simply an alphabet like ours. But in terms of magic, runes are like hieroglyphics in that each rune stands for a word or concept rather than simply a letter of the alphabet. They can be used either way. In magic, the runes are used as words of power which enhance or direct a spell. I found a handy phrase chart and used some real runes in the series, but had to use the interpreted spelling in a form one can sound out even if you don’t know what they mean.

As language developed, written runes were set aside for the more modern Roman alphabet. But the use of runes as words of power survived even Roman conquest thanks to the Druids, the ancient pantheistic religion later smeared by accusations of witchcraft and magic.

Well, witchcraft and magic are fine by me. I wish they really existed. Considering the popularity of fantasy books incorporating magic, I’d say a lot of people wish magic was real.

In the Witches of Galdorheim books, I decided to use runes as the magic language. I call it Old Runish. Kat, in Bad Spelling, just can't get the pronunciation of the runes right, mistaking îgwaz for perßô. The results are often spectacularly wrong. In other words, she is a really bad speller. Who can blame her? This is not the easiest language to learn.

Aunt Thordis is the top witch on Galdorheim and a master of Old Runish spells. If magic can be done, she’s the one who can do it. In the following excerpt, Thordis seeks information from Kat’s flash frozen father. She wants to know why Kat is such a lousy speller and suspects the girl’s father has something to do with it. Thordis invokes a runic spell to break through to the man’s frozen brain for answers. She must be careful, however, since the spell is used to re-animate the dead. At the end of the excerpt, you can read the translation of the spell. It’s pretty creepy.

“Ah, you’re still alive. Good.” If Boris were truly dead, she’d not be able to have a conversation with him. No matter what the circumstances, she wouldn’t delve into the black arts. Necromancy—raising the dead—was near the top of the black list.

Never mind what the Church thought, the true purpose of the ceremony was to communicate with, not excommunicate, the dead. Although Boris was pre-dead, it would serve the same purpose. At least Thordis hoped so. Boris knew things Thordis wanted to know, and she was determined to pry them from his icy-cold brain. Thordis lit the candle, rang the bell, and prepared herself to chant the spell to wake Boris. She’d never talked to him when he was alive, since he was a mundane, and any non-magical person was simply not worth her time. Now, she had to find out a few things. Specifically, why was her niece so powerful, yet so incompetent as a witch? If her spells just fizzled, she could believe the girl just wasn’t trying.

Instead, they failed spectacularly, and often messily, like her recent attempt to transform the rabbit. Perhaps she could get some answers out of Boris, even though she doubted he was intelligent enough to even realize he had them. 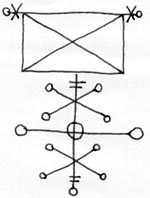 Translation of the rune spell:

I know a twelfth one if I see,

a dangling corpse in a noose,

I can so carve and colour the runes,

that the man walks

And talks with me.

--From the Hávamál, an Old Norse Edda (collection of proverbs) from the 10th Century

Bad Spelling - Book 1 - FREE October 1st-3rd
A klutzy witch, a shaman's curse, a quest to save her family. Can Kat find her magic in time?

Can Kat find her magic in time? If you’re a witch living on a remote arctic island, and the entire island runs on magic, lacking magical skills is not just an inconvenience, it can be a matter of life and death–or, at least, a darn good reason to run away from home. Katrina’s spells don’t just fizzle; they backfire with spectacular results, oftentimes involving green goo. A failure as a witch, Kat decides to run away and find her dead father’s non-magical family. But before she can, she stumbles onto why her magic is out of whack: a curse from a Siberian shaman. The young witch, accompanied by her half-vampire brother, must travel to the Hall of the Mountain King and the farthest reaches of Siberia to regain her magic, dodging attacks by the shaman along the way.