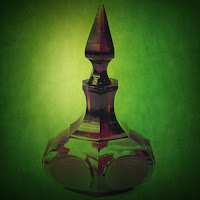 It's time to start talking about oil. Midnight Oil, that is. The color of the liquid in the bottle >>>  is close to the color of the magical oil that can be used only at midnight on the day of summer solstice. What's it for? Probably a lot of things. It's the WD-40 of magical ointments. However, in the YA fantasy of the same name, it's for healing ailments that cannot otherwise be cured.

Let's take a brief hop to the island Novaya Zemlya which is the extension of the Ural Mountains into the Barents Sea, Arctic Ocean, and Kara Sea way above the Arctic Circle. I wonder if this is the only island surrounded by three separate seas? Hm. Have to look that up.

Checking my handy-dandy Atlas, the center of the island is approximately 74 degrees North and 56 degrees East. There are two major islands separated by the narrow Matochkin strait, and a handful of smaller islands sprinkled around the edges.

The occupants are the Nenets, an indigenous tribe of hunters similar to the Eskimo and Inuits of North America. Their close cousins, the Samis, are also in the vicinity stretching across northern Siberia, Finland, and into the Finnmark region of Norway.

The Samis make up the paternal side of my heroine's family. If you read Bad Spelling, you'd also know that Kat's boyfriend is a Sami (formerly a troll changeling).

The unfortunate Nenets have a problem. Russian nuclear testing in the 1950's left about as much radiation spread about as the explosion of Chernobyl. The Cold War certainly made major nations do some really stupid things.

In Midnight Oil, the radioactivity has caused the Nenets' children born after the nuclear period to mutate. No, they didn't change into giant spiders. However, they were deformed and sick. The Nenets didn't get a lot of help from the former Soviet Union. Left to their own devices, they worked out that only one thing would save them; return them to normalcy: The Midnight Oil. 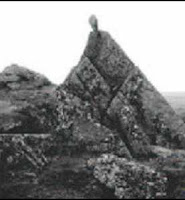 Therein lies a part of the tale. It's up to Rune (Kat's smarty-pants younger half-brother, who also happens to be half-vampire) and Ivansi (Kat's Sami grandfather) to first ask the Nenets gods where the oil is. The gods reside on a small island south of Novaya Zemlya called Hebidya Ya. You can see why it is called the Easter Island of the arctic with shrines to the various gods (illustrated on the map). Rune and Ivansi have to find the right god's pyramidal altar. The afflicted Nenets supply a totem to lead them.

Then they just have  to steal the Midnight Oil from the forest elemental who happens to have it stored in her root cellar. Ajatar (see yesterday's post on Elementals), however, is not a kindly elemental who'd be happy to help the distraught Nenets. Oh, no. Her mind is set on destroying her sister, another elemental spirit. In the meantime, Kat has been lost at sea along with her frozen father's block of ice. Yes, that's a bit odd, but it really does have a logical explanation.

You might be thinking that this plot is worthy of Days of Our Lives in complexity. Not really. Nobody has been married more than once or twice. Nobody has an identical cousin (well, actually there's a couple, but not really related), and very few people have died and been resurrected.

Okay, maybe it is as complicated as a soap opera. But it's a lot more fun and filled with puns. I hope you'll want to read it since it's free right now.

MIDNIGHT OIL - Book 2 - Free October 8th-10th
Shipwrecked on a legendary island, how can a witch rescue her boyfriend if she can’t even phone home?
Traveling with her newly-found grandfather, a raging storm catches them unawares. Kat is tossed into the icy seas, while her brother and grandfather travel on to find help. Kat is rescued by an unlikely creature, and Rune is captured by mutants. Only the magical Midnight Oil can save her brother, but an evil forest elemental is trying to stop her.