Book 2 of the Witches of Galdorheim 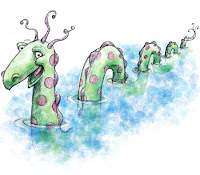 Ceto nee Nessie In the second book of the Witches of Galdorheim series, our erstwhile heroine gets a little help from an unusual source. Did you ever wonder why there are so few sightings of the Loch Ness monster? Well, Nessie vacations on Ultima Thule, which may be the remnants of Atlantis.

In Greek mythology, Ceto or Keto (Greek: English translation: "sea monster") was a hideous aquatic monster, a daughter of Gaia and Pontus. The asteroid (65489) Ceto was named after her, and its satellite (65489) Ceto I Phorcys after her husband. She was the personification of the dangers of the sea, unknown terrors, and bizarre creatures. Eventually, the word "ceto" became simple shorthand for any sea monster. The term cetacean represents a case in point. Her husband was Phorcys and they had many children, collectively known as the Phorcydes or Phorcydides. In Greek art, Ceto was drawn as a serpentine fish. Ceto also gave name to the constellation Cetus.

Ceto and Nessie become one. She’s not a bad, um, person, but much misunderstood. She finds my heroine adrift in the northern seas sitting on a block of ice. Oh, yeah, I should mention that the block contains the body of her father. Ceto finds this all fascinating and helps my heroine dock the ice block at Ultima Thule and find a messenger to send for help from the Witches' Island of Galdorheim in the Barents Sea.

Kat sat cross-legged on the ice, one hand clutching the rope, and looked down at her father’s face. His eyes were open but unseeing. The deep gash on his forehead didn’t do much for his appearance. She hoped when he reached Siberia for his final burial, the Samis would fix him up a bit. She knew it didn’t matter, but it would make her feel better.

A wave came out of nowhere; the ice block rose and fell almost knocking Kat into the water. She clutched at the ropes and looked in all directions, but the sea remained calm. She frowned, wondering how… Then, a light bulb blazed inside her head when she sensed something large passing under her makeshift boat. 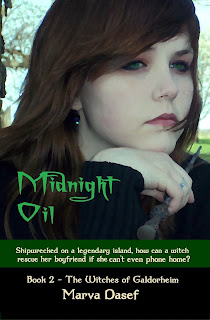 Kat discovers that an evil forest spirit has kidnapped her brand-new boyfriend. She sets out with her brother, Rune,

from her Arctic island home on a mission to rescue the boy. Things go wrong from the start. Kat is thrown overboard during a violent storm, while her brother and his girlfriend are captured by a mutant island tribe. The mutants hold the girlfriend hostage, demanding that the teens recover the only thing that can make the mutants human again–the magical Midnight Oil.