A love besotted boy asks a peculiar corpse if love is in his future. The short story ebook containing this story and many others is free February 14th-18th on Amazon.

A Visit to Potter’s Field

Originally published in Lorelei Signal and “A Time To..., Volume 1” from Wolfsinger Publications 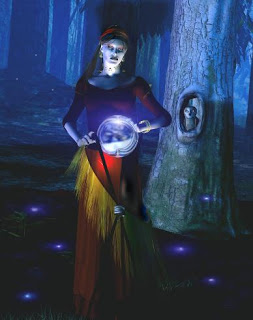 “Now who? More of those darned kids?”

“What do you want? Can’t you just leave me alone?”

“Oh, for Pete’s sake...some people have no manners.”

Griselda reached up through the hole in the coffin and pulled a clod of dirt downward. Grunting with the effort of digging herself out of her grave, she also muttered a few very unkind words about the visitor and his parentage.

“I am doing my best. Quit being so impatient. Hmmph.”

She managed to break away another part of the pine box lid and pulled more dirt into the coffin.

“A damned good thing those city employees are so lazy,” she muttered. “A real grave would be six feet deep. We get maybe two feet at best in Potter’s Field. Then, all the time, it’s rap rap rap, with some fool wanting to ask a question.”

“I SAID I’M COMING!” Griselda shouted as she dragged more dirt into the coffin and shoved the clods down to the foot. She noticed her words came out more like “I YED I COING.”

Her knees were now bent and touching the inside of the coffin lid. She shoved her left elbow to the side and knocked out another piece of wood. As she suspected, there was some open space around the edges. She pushed the dirt out of the coffin.

Finally, her groping hand felt a breeze above her. Something grabbed it and began to tug at her.

“Wait! You idiot! The lid is still in the way.” Whoever had pulled at her let go. She felt two fingernails give way. Damn. She only had three left.

She grumbled about lost body parts as she pushed upward on the inside of the lid with her knees. A screech from the rusty nails pulling loose set what was left of her teeth on edge.

Pushing her hands through the widened hole, she gripped both sides of the coffin and pulled herself upward. Dirt, worms, and other unidentifiable material fell off the top of her head and down to her shoulders. She shrugged to loosen the gap even more. Her head popped above the surface and she gasped the cold night air, her first breath in over ten years.

She looked left and right, then swiveled her head around to look behind. A young man stood with light flickering on his pallid face. His eyes were open so wide she thought they might pop out (a lovely thought), the round O of his mouth a frozen rictus of horror.

“Just what did you expect? A burlesque dancer?” she said in disgust. After all, he called on her, not the other way around.

“Hmmph,” Griselda grunted as she pushed herself up out of the grave. She sat on the edge of the pine coffin and looked around. The graveyard looked much the same as it had when they’d buried her. She thought some things must never change.

“Well, what do you want to ask?” she said as pleasantly as possible, though speaking properly without lips and tongue was difficult. Ah, wait. A bit of tongue was still attached to the back of her throat. She coughed and spit out a beetle that had made a comfortable bed against her tonsils. With a bit more tongue, she asked more clearly. “What do you want?”

“Spit it out. Hee hee,” Griselda cackled at the joke, since she’d just spit out a bug.

The boy cleared his throat and took a deep breath. “Miss, uh, Gypsy, I heard you have to answer the question of whoever digs you up,” the boy began.

“Yes, I do have to answer,” she said, then muttered under her breath, “Stupid curse.”

“I want to know if Emily is my true love.”

“Emily who? Come on, boy, give me some details. I don’t exactly get the daily news down there.”

“Emily LaFleur. She’s my girlfriend, but she’s been going out with Beau Richards. You know, he’s just a jock. He can’t offer...”

“Tut tut tut. Too much information. Let me see if I’ve got this straight. You love the girl and the girl loves the jockey and you want to know if she’s your true love?” Griselda sighed. She wished these young pups would come up with some better questions. What about world peace? What about death, famine, and pestilence?

“The simple answer, my foolish boy, is no. She can hardly be your true love if she’s gallivanting off with a...jockey, did you say? They’re kind of small, aren’t they?”

“Not a jockey. A jock. He plays football.”

Griselda glared at the callow boy until he turned his eyes away. She wasn’t sure whether it was in shame or because she had a bit of pus dripping from her left eye. She’d been dead for more than a hundred years and they expect her to keep up on sports?

“No, she’s not. Now, pick up that shovel and get me back in the ground. This damp air isn’t good for me.”

This story and a bunch more are all available in "Mixed Bag 2: Supersized." The book is free on Amazon from February 14th - 18th. One whole week of free reading if you haven't got a date. 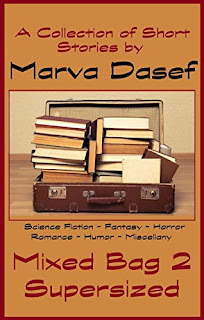