EBOOK FOR VETERANS
AND THOSE WHO LOVE THEM 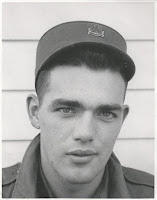 I'd be remiss if I didn't include a mention of my very own veteran, Jack (cute, isn't he?). He served in the Philippines before Vietnam became "official."

He was in Intelligence, which meant he spent his time listening to communications between the Viet Cong who were already fighting with South Vietnam for the unification of the country into a single Vietnam under the Communist party. Heaven forbid the US would allow people to choose their own system of government.

In honor of all vets from all wars, I hope you'll give the gift of Tales of a Texas Boy to a veteran you love from Amazon.