A Wager of Blood - Book Review 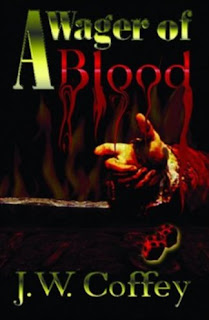 Buy it at Amazon.
From Amazon: On a night in 1760, Matthew Harper played a seemingly innocent game of chance in the parlor of the inn he owned. However, before the night was over, the inn belonged to Newell Thornton. Matthew, his wife, and two other people lay murdered, and the inn burned to the ground. 240 years later, Zachary Harper is determined to reclaim the Thornton Inn for the Harper family. What he doesn't know is that the old inn holds the key to that ancient murder, the gateway into Zachary's private hell, and the souls of the four murdered people. He is soon swept up into a diabolical game of chance where his own soul is the prize, and dice are loaded against him in a demonic Wager of Blood.

My Review of the Book

A Wager of Blood plays out in both the 18th and 21st Centuries. Good friends Meg and Frankie have a reunion in a small town in New Hampshire. Meg is married to Zach, the manager of the rebuilt Inn, now a restaurant. Frankie's significant other, Sean, couldn't come along on the trip, but also grew up in the same New Hampshire village.

We learn within the first fifty pages that a killer is on the loose, luring naive businessmen to their death by torture. Coffey has vividly written those opening scenes and made the hairs standup on the back of my neck.

Following this brief intro to the bad guy, the book takes the reader to the reunion of the two women. They go to lunch at the restaurant at the Inn. Meg has already expressed a fear of the old Inn, hearing whispering voices and experiencing some poltergeist activity.

While having lunch, the owner of the Inn appears. Frankie immediately fears the man. Of course, we readers will understand that nasty Mr. Thornton is part of the evil that Meg feels at the Inn. Frankie hears the whispering voices like Meg did and is drawn to the upper floors of the Inn, a place that is off-limits to the Inn's customers.

The two women ascend to the second floor and all hell breaks loose, complete with blood pouring across the floor, screams of tortured souls, and ghostly presences.

Frankie opened her mouth to try and speak, to give some comfort or assurance, but she didn’t get the chance. She turned to see the brass handle of the door twisting up and down; the door, violently, battering itself in the socket that held it. The shaking grew in strength until a picture hanging nearby flew off the nail holding it, dropping to the floor and shattering the glass. The shards mingled with the pool of blood, causing an obscene sparkle to the mess.

She felt a tingle and her right palm began to itch and crawl with unseen insects under the flesh. A burning began to build under the skin, making it feel like it was blistering. She held the hand up to reassure herself that the flesh was not about to bubble off. The pain was becoming increasingly excruciating, and she cradled her palm against her ribs. It was a moment before she realized that the hallway had been plunged into silence again. The door had stopped its insane vibrations.

But that's all I'm going to say about the plot because I'd think the readers would like to discover for themselves what happens next in "A Wager of Blood."

I can add a few comments that aren't spoilers. J.W. Coffey is a very good writer and you'll have no problem being carried along in the book. I stayed up way too late reading the first day I received the book. I paced myself after that and firmly shut the book at the end of a part. Not a chapter, but a Part.

Coffey has cleverly divided the book into parts with intriguing titles taken from gambling terminology.

Part One - The New Shooter Steps to the Line
Part Two - Seven's a Bruiser, The Front Line's a Loser
Part Three - The Stickman and the Come Out Roll

Now, I don't know diddley about Craps, the dice game on which Coffey based these titles. That's okay, though. You don't have to know how to play the game to get the connection, sinister as those connections are.

If you like horror, Wager will satisfy your desire for blood. If you like historicals, there's plenty of time spent in the 18th Century. If you like romance, there's some of that going on, too. That's not to say the book doesn't know where it's going; it does. It provides an interesting and balanced crossover of genres to interest a broad range of readers.

From the first pages describing a kidnap and torture to the last page telling of an unholy alliance between an ambitious woman and the devil, Coffey carries you along with plenty of heart-pounding excitement, lots of the 'ew' factor. And maybe you'll learn how to play Craps, but you may wish you'd never heard of the game.

Okay, there are some down sides to the writing. Hey, I've got to be real here. Some chapters dragged for me. A few times (and it was few), I felt like saying "Get on with it. I already know this." An author, I think, doesn't need to keep restating the obvious. How about an example. In Part titled "Interlude Two: The Dark Side," we find Meg back in the office talking to Zach. She's hesitant to tell him what she saw and he's hesitant to tell her what he knows. I'm thinking, "Hey guys! You're in love. You trust each other! Get on with it!" I tended to skim here because I didn't think these two would be so cagey. If my hubby was beating about the bush like Zach, I'd smack him. I think Meg should buck up and tell Zach what she saw and Zach should trust his wife.

Okay, that may be coming from my LONG time marriage. Meg and Zach are newlyweds, so maybe don't have the trust established. I'd urge Coffey not to let these scenes drag down the pace. I think that "A Wager of Blood" is a wild ride of mayhem and, as a reader, I'm up for it tearing along at a fast pace.

On the other hand, maybe the average reader wants a breather once in a while. That's fine. I'll skim, though, and I think other readers will, too.

That is not a huge downside to "A Wager of Sin." I am of the opinion that most readers who like a bit of devil worship, torture, ghostly presences, and so on will enjoy this book immensely.