Part 1 Interview - Waiter, There’s a Dragon in My Soup 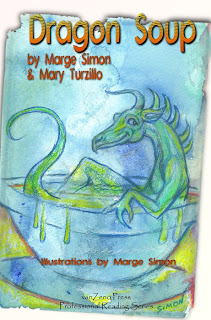 Marge Simon and Mary Turzilla have a cool book coming out in January from vanZeno Press. I'll be posting a rather lengthy interview with the two of them over two or three posts.

What more can be said about dragons? Somehow or other, Marge Simon and Mary Turzillo have quite a few things to say, ranging from soup to nuts. Oh, there’s that soup again! "Dragon Soup" is a book of poetry, essays, and short stories, combined with illustrations all about dragons. Marge Simon is an award-winning poet and illustrator and Mary Turzillo has picked up a Nebula (1999, Novelette, "Mars is No Place for Children").

These gals are heavyweights, but only in the publishing sense. Hey, don’t smack me! That’s a compliment.As you can see by the cover, "Dragon Soup" has a whimsical twist to it. I thought I’d ask the ladies a few questions about dragons, poetry, illustration, and if they do, indeed, have a good recipe for dragon soup.I’ll toss the questions and you can decide who will answer what or if you both would like to field one.
Q: What are you bringing new to the field of dragonology? (By the way, is that the right term for the study of dragons?) How is your vision different from what people might find in traditional books or on the internet?
Mary: As for me, my dragons are sensual, sexual, and powerful, with the emphasis on the word sensual. They are emblems of the untamed powers of the universe and of human nature.

They also like to play. If the plaything is a human, it may come out slightly dented.

I know others have portrayed dragons as untamed, powerful, emblematic of human dominance, but Marge and I are both intrigued by the sensuality aspect, and I believe our take is a little different. And new.
Marge: Dragonology is fine, but Wyrmology is accepted as well. I say put aside what you think you know about dragons from myths and legends. For example, I have two pieces where the dragon lays but one egg. Several distinguished dragon "reference books" state that dragons lay a clutch of six to eight eggs. And there’s also the rule that dragons can’t interbreed with other dragon species. That’s silly, of course they can. And that idea that all trolls are ugly and that no dragon would have any interest in one –absurd!
What about Puff, the magic dragon? Did he deal dope, or was he really innocent. Puff knows, and he ain’t telling.
Q: Did you research dragons in literature for the book, or are either of you a Professor of Dragonology?
Mary: I wish my university had offered such a degree.
Seriously, I do have one claim to expertise. Under a different name, Mary T. Brizzi, I wrote a book about Anne McCaffrey (The Starmont Guide to Anne McCaffrey). There's more to McCaffrey's genius than Pern, of course, but I did quite a bit of research on dragons and how McCaffrey crafted the world of Pern and dragon physiognomy. Behind her alluring portrayal of the beasts, their riders, and their bond, quite a bit of careful science lurks.
Incidentally, I regard McCaffrey as one of the great creative imaginations of our time. But, that said, our dragons are not McCaffrey dragons. They aren't as noble. I know Pern dragons are sexual, but their emotions are more lofty and humane than Dragon Soup dragons. And if our dragons bond, don't trust that bond.
Marge: Mary comes with a Ph.D and I only have an M.A. But she agreed to let me be part of the project anyway, since we both have 1/32 dragon blood. DB positive. But seriously, dragons are often part of children’s dreams, though most of the time, we can’t remember that part. Obviously, I had a friendly one in my childhood. Otherwise, why would I be such a fantastic person? Synergenic by nature, bursting with creative ideas? If you have a soul that is unclaimed as yet by the Demons of Mass Destruction, then you know all about dragons. You just don’t remember the truth, which is not to be confused with facts.


To be continued (and we'll learn the truth about dragons and virgins)....