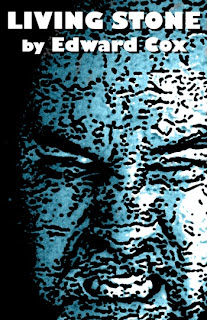 Available at The Genre Mall

Interview with Ed Cox on this blog

Old Herne is terrorising Forest Gate, and the London police are stumped. For three months his victims have been found dead at the church down Cernunnos Lane, their bodies brutalised beyond recognition. Leading the investigation is Oscar. He is yet to uncover one single clue that reveals the killer’s identity or his motives. He does, however, have the prestigious honour of being the only person to have seen Old Herne and lived . . . trouble is, Oscar can’t remember what he saw, and now he has been kicked off the case.

However, Oscar isn’t deterred. Dogged by nightmares and visions of shadowy monsters, he becomes obsessed in his pursuit of the killer and the truth behind his lost memories. But even he couldn’t guess that Old Herne’s origins hark back to the turn of the first millennium, and a legacy left by the man who dared to meddle with stones from the sky.

"Living Stone" opens with Detective Oscar in a back alley pursuing a serial killer, the press has dubbed Old Herne. Oscar has been on the case for some time, and he’s definitely troubled by the brutal killings. He’s surprised when he sees the supposed next victim of the killer performing the killing herself. He come on the scene when the woman victim is in the act of tearing out a man’s throat with her teeth. Pretty gruesome stuff. He follows the woman to an old stone church, no longer (or never) used as a place of worship.

There are huge questions right from the start of the fast-paced novelette. Why is this stone church sitting unused through the centuries? Why is the supposed victim apparently now the killer? Is Old Herne the forest god of ancient British mythology?

We find out the history of the stone church by stepping back in time hundreds of years. We discover that a stone mason named Morgan has found a meteor and opens it up only to release an evil which we can surmise might be an alien being. The alien has no form itself, but inhabits Morgan, driving the man insane. Morgan relies on a creature living in the church to help him gather sacrifices for the stone. My immediate thought was Herne is something like Quasimodo. The man-beast is subservient to Morgan, although it does understand his master is insane and hates Morgan being taken over by the stone.

Alternating between some time in the far distant past and today, "Living Stone" describes an old evil still lurking and taking victims. Mr. Cox handles the time skipping deftly. The reader is never left scratching her head trying to figure out which era the story conveys. The main characters are all well drawn. Morgan, the victim of the stone’s evil, has no will of his own. Oscar is being sucked into the evil, but resists. Herne, once Morgan dies, becomes the servant of the stone’s alien presence despite his knowledge that the stone is evil.

The setting in London’s Forest Gate area is suitably creepy. Cox’s creation of the Old Church is particularly interesting, making it seem quite real. Having visited London, I can easily imagine that the Old Church exists.

Living Stone is a novelette length, so a very quick read. Now, that’s my one and only complaint about it: Cox didn’t make it nearly long enough. I think the concept could easily be expanded into a novel and I hope Cox considers this for the future. It might also be fun to have a series of stories on Detective Oscar pursuing creepy monsters through the back streets of London.

My verdict: Well worth buying.