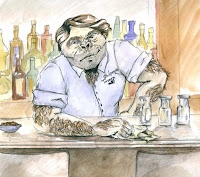 Sasquatch, Big Foot, Fouke Monster, Yeti, Skunk Ape, Abominable Snowman, Fear Liath, Chiye-tanka, Quatchi (the name of the Sasquatch mascot for the 2010 Vancouver Olympics), etc, etc.
There’s hardly a more ubiquitous critter that’s never been scientifically proved to exist than the Sasquatch. I prefer that term or Big Foot since I live in the US Northwest, and he’s our monster.
I’ve toyed with the big guy in a couple of stories. Funny thing, I just keep seeing him as a bartender. The picture is by Holly Eddy and adorned my story in Lorelei Signal titled "Chilpequin 22 Miles." The story also appeared in "A Time To... Volume 1," the best of Lorelei Signal for 2006.
But the first time I gave Sas a job was way back in the 80s. This tale first appeared in Bewildering Stories in 2007. An audio version is attached. I’ve changed a few words, but it’s mostly the same.

FAIR’S FAIR
I lurched across Pioneer Square, hurt by the turned-away eyes. I wish they`d look at me. Go ahead and stare! After the car wreck and the flash fire, the doctors did their best to put me together, but even a pro can`t fix a thing if some of the parts are missing.
I dragged my body into a bar and pulled myself up on a barstool, making sure that the cash register blocked my view of the mirror. As usual, I sat with head bent, hat pulled down over my eyes.
"What’ll ya have, buddy?" the bartender’s rough voice rumbled.
I looked up, expecting the usual gasp of surprise or disgust, the eyes shifting left or right. I got neither. The bartender looked straight in my face, continuing to wipe the glass he held.
I was the one who gasped. He was over seven feet tall with one of the ugliest faces I’d ever seen, including my own. He was poorly shaved, the stubble continuing down his neck to disappear under his shirt.
"I said, what’ll ya have, buddy?" he repeated.
"Uh, scotch," I whispered. This was not a man, I thought. His nose was a snout; his canines long and pointed; his arms would have hung to his knees. He looked like those pictures, except for the shave and clothes, of course. My own appearance made me bold; people tolerate questions from those they pity.
"You look like one of those Bigfoot monsters," I ventured, made bold by my own visage. His chuckle was a guttural cough.
"So?" he said nonchalantly.
"So, how can you be here? Why haven’t the cops or the zoo come to get you?"
"You oughta know the answer to that, buddy," he grinned.
"What do you mean?"
"C’mon, you’re almost as ugly as me. It works great–right, buddy?"
I could see how it worked for him. When you’re as ugly as that, no one looks at you. He`d have no problem hiding out in the city.
"But, why?" I wanted to know.
"We–yes, there’s lots of us–did okay in the woods until all those science guys and hunters started comin’ after us. We want to be left alone, so we went where no one would think to look for us."
Dollar signs danced before my eyes. "What if I turned you in?"
"Now, you wouldn’t do that, buddy." His confident gaze met mine.
I decided quickly, and answered – "Right . . . fair’s fair."