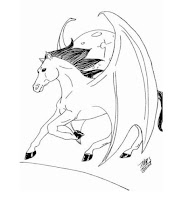 That archaic term means something is unbelievable, nonsense, hogwash, bull puckey.
What does that have to do with myth and legend? Flying horses, of courses. The remake of Clash of the Titans is coming soon to a theatre near you. In the trailer, Pegasus is a gorgeous black horse with ebony wings. Feathered wings. This has been the tried and true formula since Grecian myth. From the Encyclopedia Mythica:

In Greek mythology, Pegasus is the winged horse that was fathered by Poseidon* with Medusa. When her head was cut off by the Greek hero Perseus, the horse sprang forth from her pregnant body.
* Percy Jackson’s father does get around. A lot.

I’ve never been convinced that a winged horse would also have feathers. In Seven Adventures of Cadida, I introduce not one, but two! flying horses.
My Mashup
Cadida and the Sultan’s Horse - Horsing Around
Cadida finds a talking, flying, fire-breathing horse named Baakir hiding in her father’s stable. He’s trying to look casual, but Cadida notices that he’s whistling and hiding his head in the corner of the stall. Highly suspicious behavior. When Cadida approaches, an eagle flies through the stable at head height scaring the horses, including Baakir. He levitates a foot into the air and spits fire out of his mouth, setting the hay on fire.
Cadida rushes to the rescue and beats out the flames. She and Baakir have a little chat while he explains that he’s a cross-blood horse, mostly horse, but just a wee touch of dragon blood. This means he can fly (without wings) and breathe fire. However, he’s not very good at either talent. Cadida helps Baakir gain control over his magic.
Cadida and the Dragon Demon - Blood is Thicker 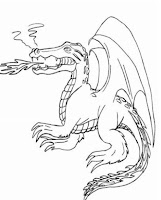 After Baakir has headed back to the Sultan’s Palace (where he lives), Cadida and her genie run across Azhi Dahaka, the dragon-demon which provided (unwillingly) the blood to make Baakir a flying fire-breather.
Trapped high atop a mountain, they watch while the dragon heads for the palace. From what he’d said before escaping from the caves (just stick with me here; I don’t want to give away every plot element), Cadida and Bascoda believe the dragon wants to harm their friend, Baakir.
They’ve got to get off that mountain fast. Bascoda gives wings to Cadida’s mare, Rosetta. But we all know that horses don’t have feathers, so Rosetta’s beautiful wings are covered with the same lovely hair as the rest of her body. The little mare takes to her new appliances immediately, carrying Cadida to the Sultan’s Palace to save Baakir.
There we have it. Two flying horses, but not a one with feathers.
NOTE: The illustrations are from "The Seven Adventures of Cadida" and are the copyright of Teri Santitoro, who illustrates as 7ARS.