Upcoming Release - The Heart of the Rose 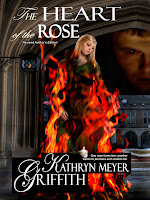 The Heart of the Rose
by Kathryn Meyer Griffith

Bronwyn is kind and resourceful, a healer and a woman ahead of her time who cares for her aging father and two young sisters. She can entrance a man with her sweet voice, the beauty of her face. However, she’s an impoverished peasant who lives in the dark, suspicious times of fifteenth-century England where such a woman is feared. Witches are believed to be everywhere, waiting to ensnare a powerful man…like Edward the Fourth of England, who comes across her one day singing in a tavern and makes her as his mistress.

Edward’s powerful adversary, The Earl of Warwick, is seeking to take over the throne of England. Bronwyn is torn between the two; one she loves, the other she loathes. One cherishes her, the other wants to possess and control her. As the battle lines form, and the country is torn apart by political upheaval and bloody carnage, the two sides wrestle for the crown. Who will she end up with? Which man, when she’s condemned to burn as a witch, will save her and which man will let her die?