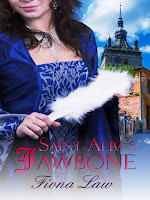 After witnessing a violent domestic dispute, Jack is entrusted with the task of escorting Clara to the order of St. Alba’s Jawbone. Their journey comes to a halt when they are coerced into stopping at Godwick, where Jack takes up residence in his old master’s house. In her last days of freedom, while Clara waits to enter the silent order, she befriends the fearful apprentice boy, nurses the ailing but lecherous master Dermot, and coyly avoids the advances of the dashing Sheriff of Godwick, for Clara has eyes only for Jack. But it seems his head is turned by an old flame of his, a woman determined to see that Clara becomes a bride of Christ, rather than Jack’s wife. Thrust into opposing teams as the day of the pilgrim march nears, will Clara and Jack speak of their love for each other, or will they bow to social pressure and let the surging crowds of Godwick sweep them further and further apart?