Check Penny's blog today for my post on Glaistig, the Scottish vampire.


The book trailer for Scotch Broom is featured today on You Gotta Read Cover Contest.

Today, I welcome Penny Estelle. Although fairly new to publishing, she's already establishing herself as a middle-grade author with her book, Hike Up Devil's Mountain.

(Q) Thank you for joining us today. Before we begin, please tell our readers where they can find you.

My first book, Hike Up Devil's Mountain, is a MG/tween adventure story with some magic peppered throughout. Two boys, along with the school bully, have their lives turned upside down and the only one that can help them lives on top of Devil's Mountain. The question is will they survive the hike?
Solstice Publishing Amazon Smashwords

I also have a story out titled A Float Down the Canal. This is also a MG/tween story of twelve-year old Pam Simpson who has to give up her plans to watch her brother. The next bomb is dropped when her mother says her cousin, Candy, is also coming over. Pam doesn't even like her cousin. She is too prissy. This is a story about how Pam's worst day ever, becomes one she will never forget and it all starts with a float down the canal.
Smashwords Sony ebooks Kobo ebooks

(Q) Where did the concept for the book (or books) come about?

For Hike Up Devil's Mountain, I was watching my grandson play with a plastic dragon and I came up with a great ENDING for a story. All I had to do was come up with a beginning and a middle.

A Float Down the Canal is actually a mostly true story about when we were kids. We were a rowdy bunch and the names were changed to protect the innocent! LOL

(Q) Did you have to research a lot? If so, what are your favorite sources?

Very little research was done for these two stories. They are totally fiction and first hand knowledge.

HUDM took about 6 months. When I started writing this, my daughter was teaching 5th grade. I asked her to read the first few chapters to her class and see if there was any interest or did they fall asleep while it was being read. Well they liked it very much and she used the remaining chapters as incentive - and it actually worked for her!

(Q) What do you do for fun other than writing?

I really like going 4-wheeling. We live so rural and there are tons of dirt roads around that need exploring. We do lots of exploring. I also like to…a hum….gamble, as we live fairly close to Laughlin, Nevada, and of course there are the grand kiddies. I have 7 of the little darlings and I love visiting with them.

When I am writing a story I do it horizontally. I lay on the couch with a pad of paper. TV can be on or music can be blaring. Now when I edit, I usually do that when nobody is up - 4 am in the morning, or later in the evening. I need quiet for that!

(Q)  Do you secretly want to write another genre, but don't think you can do it?

(Q) In your ideal world, put in order those of most value to you:

(Q) What are your writing strengths? Weaknesses?

I think I am pretty good at getting into a kid's character. I love a kid with whit and sarcasm and my own kids have given me plenty of usable material, which they come by honestly. I also worked with kids for 21 years.
My weakness is sitting down on a regular schedule to get my writing down. I am such an outdoors person and I want to be playing.

Oh coffee….or I should say, add a little coffee to my flavored creamer!

Sometime in May my short story, Billy Cooper's Awesome Nightmare, is due out. It's a time travel fantasy about 7th grader, Billy Cooper, who finds out on Friday afternoon, he has an oral report due on Monday on whatever subject he draws out of a box. Well, he is annoyed as he has way too many things to do during the weekend. He figures 5 minutes on the computer and he will skate by on this assignment. All that changes when he finds himself in the 14 century, face to face, with his drawn subject.

I am hoping to do a series on this type of story. Today's kids, with their humor and speech, meeting up with historic legends. I think the stories could be funny, adventurous, with a little education thrown in.

(Q) What do you do to market your work? How did you start and where do you learn to market?

Let me say Marva, this is a continuous work in progress. I have been published for not quite a year and marketing was all new to me. I mean I figured I would sign my contract and the money would start pouring in. YIKES…Writing is the easy part. I am still learning this whole marketing adventure. I have my website on my car. I have bookmarks. I twitter, use Face book, and blog. I've been interviewed on the radio and have my story in a few school libraries and the city library. Marketing is not for sissies!

(Q) Do you have or used to have a day job? Did it inform your writing in any way?

I was a school secretary for the principal in a K-8 school. I have heard so many excuses from every age child. So many times I had to leave my office because I was sure I would burst out laughing. Funny how even the rowdy ones leave an imprint on your heart (in a good way) I promised myself when I retired, I was going to write for this age group and I am giving it my best shot. Also, I could always find the little kids in the library, but not so much the older ones. I can't stress enough how very important I think it is that in today's world, kids need to read and read well.

That being said, I also think kids of today should be able to escape some of the realities of the world to a world of fantasy and adventure. That's what I am trying to do.

Ten-year old Andy Thompson disobeys his mother and sneaks into the basement of an old abandoned house that’s due for demolition. He stumbles upon a mysterious box under an old cabinet. And his troubles begin when he looks inside.

The Crew brothers, twelve-year old Jason, and ten-year old Danny, also find their way to the basement. New to town, Jason has established himself as the school bully. A struggle ensues between Andy and Jason, and the bully ends up as a toad.

Somehow, the boys must reverse the magical spell. And that means hiking up the dread mountain: fast pace, fast action and some scarey turns and surprises on the way! The lives of all three boys seem destined to change forever, if they survive…

Andy was peering into the biggest tunnel. Danny peeked in from the other side. A dull greenish light barely glowed in the inky blackness. It got brighter and the boys could hear a shuffling sound. The odor was overwhelming. “Something is coming!” Andy whispered in a panic. “Hide!”

Danny scooped up his brother and both boys dived behind the big gold rock, holding their breaths. Andy was afraid he was going to throw up as the shuffling got louder and the odor got stronger. He started to peek around the rock, but Danny grabbed his arm, shaking his head frantically back and forth.

Andy mouthed the words, “We have to see what it is.”

Andy and Danny turned away from each other. Each one slowly peeked around his side of the rock. Emerging from the tunnel was a slimy, brownish-green, wormy-type lizard. It had a lizard-shaped head with eyes that were nothing more than slits. Green goo oozed from his tightly closed mouth as he dragged along. It had four front legs, two on each side. Three long black claws protruded at the end of each leg. The two front legs slowly reached forward to pull the body along, while the two in the back seemed to just drag along, making it a slow moving . . . thing.

It finally made its way completely inside the cave. This thing was at least ten feet long and four feet tall. The end of its wormy body had a long bony tail with the same black claw on the end of it that dragged on the ground. More green ooze dripped off its body leaving a slimy glowing green path on the cave floor.

Andy and Danny turned back and looked at each other. Relief flooded their faces. The thing was so slow. They could walk away from it and still be out of its reach.

Using his two fingers next to his thumb, Andy made a sign of walking and pointed to the tunnel partially covered by the gold rock.

A croaky whisper came from Danny’s pocket, “Well, what was it?’

Danny’s hand flew up like a shot to clamp his hand over his pocket.

A small, “ugh” could be heard as the breath was knocked out of the toad.

Both boys, holding their breath, slowly turned to peek back around. It wasn’t there. Only eerie puddles of glowing green glob could be seen.

Andy quickly turned to Danny and raised his shoulders silently as if to ask where is it.

A drop of green goo plopped between the two boys. The smell was everywhere. A small river of thick green slime was running down the gold rock. Slowly their eyes traveled upward. 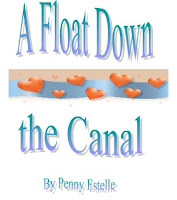 A Float Down The Canal
Synopsis

Twelve year old Pam Simpson gets dumped on when her mother is called into work and she must cancel her plans for the mall to babysit her younger brother and his friend and go to the public pool. To make matters worse her cousin, Candy, is also coming over for the day. She doesn’t even like Candy!

Much to Candy’s dismay, transportation to the pool is on inner tubes, floating down the canal. One thing leads to another and it is Pam who, once again, must save the day.

When things couldn’t seem worse, the day takes a drastic turn for the better and it is Candy, and the float down the canal, that makes this the best day of Pam’s life!