Tales of a Texas Boy is available in Large Print on Amazon for $8.99 and standard trade paperback for $7.49. It's also in ebook format on Amazon, Barnes and Noble, and Smashwords for 99 cents.

Tales of a Texas Boy is a series of related short stories loosely based on my father's stories about his boyhood in West Texas during the Depression.

It all started with a cattle drive. Yeah, right, pop. Nobody had cattle drives in the 1930's. Well, yeah, they did. My father, Eddie in the stories, got to ride herd when he was only eleven years old. That was sure the highlight of that year.

His father, Louis (my grandfather), had been a veterinarian with Blackjack Pershing's American Expeditionary Forces. That's what they called the army during WWI. In the service, he became friends with an interesting old guy who happened to have a bear. When Dad Boles brought Sophie to the annual fair, Eddie loved to sit by the campfire listening to some dandy whoppers.

Eddie had a pretty busy life for a boy who lived miles away from the nearest neighbors. He managed to find plenty of trouble to get into, but had a big heart to soften his bad boy image. No matter that he loved to aggravate his sister, he took care of her when she and her pony were almost swept away by a flood.

The boy cared about the rattlesnakes, the jackrabbits, the jack asses, even old Cage McNatt's prize sow. He went fishing with a special borrowed float, then proceeded to lose it, find it, then give it away.

These are simple tales without any big events, unless you consider the despair of the Great Depression hanging over everybody's lives. 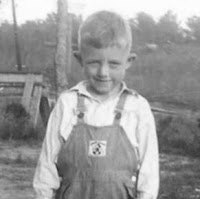 Yes, I made up some aspects of the stories, and I even made up a few completely, but most of the book is as true as a Texas Tall Tale can be.

If these kind of stories appeal to your father, your mother, uncle, aunt, or even yourself, I think you'll be glad to read my father's stories. Since he died last August, I'm proud and relieved to have gotten around to writing the stories, having several published separately, then putting all of them together in one book. I decided to feature Large Print since my father's eyesight was failing.

Email ThisBlogThis!Share to TwitterShare to FacebookShare to Pinterest
Labels: Father's Day, Tales of a Texas Boy