SCOTCH BROOM: Book 3 of The Witches of Galdorheim
A magical trip to Stonehenge lands a witch in the Otherworld where an ancient goddess is up to no good. 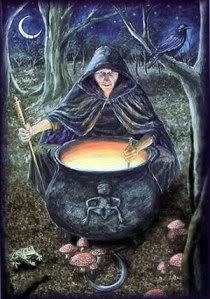 Living in the Otherworld after the Celts have stopped worshipping the old ones, Cailleach has let herself go to seed. She spends her days attempting to make sense of the hags’ potion in MacBeth (Double, double, toil and trouble). When she hears that a witch has come into the Otherworld, she begins to scheme. If Cailleach can only steal the witch’s magic, she can be young and powerful again. But the crone is cautious, she sends her minions out to learn more about the witch and to lead her to the goddess. While waiting for news, she learns that yet another witch has entered the Otherworld, but this one doesn’t make any sense. Cailleach determines this being is male, thus a warlock, but also smells of vampire. She decides to draw in this one like she plans for the first. But first, she decides to do a little homework.

She is depicted as as having an eye in the middle of a blue-black face, long red teeth, and matted hair. In several stories she appears before a hero as a repulsive hag and suddenly transforms herself into a beautiful girl. At winter’s end, some accounts say the Cailleach turned into a grey boulder at Beltane until the warm days were over. The boulder was said to be “always moist’, because it contained “life substance’. The Cailleach Beara is ever-renewing and passes through many lifetimes going from old age to youth or flesh to stone in a cyclic fashion.

It’s easy to see why Cailleach is so interested in regaining her strength, to be come what she had been in the olden times.