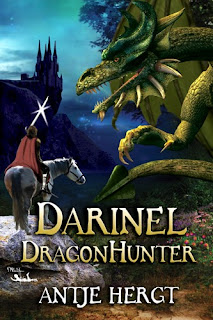 My guest today, Antje Hergt, who likes to hang out with dragons, so I'm sure she doesn't mind consorting with witches.

Why bother with writing at all if it takes so long to publish a book?

I’ve been asked this question many times in the recent years while I was working on my first book. There were even times, when I stopped telling people about it at all. I was tired of having to explain over and over again how the publishing industry works. When I started out writing seriously, I told everybody I knew that I had written a book. It was only a first draft and I was so proud of it. Little did I know about how long the book writing process was, let a lone a publishing one. So, while I edited and re-edited my book, went from first draft to fourth and many more, all my friends kept asking where they could buy my book.

Hardly anybody understood that it can take years to write and edit a book, many more years to sent out query letter and receive rejections letters. When a traditional publisher finally accepts your book, it still takes up to a year to have it in a bookstore.

That’s what I like about e-publishing, it shortens the process and you can release a book much faster than a hard cover book.

I write for the fun of writing itself. I love the flow of it when the story pours out faster than you hands can type. When I become part of my story and I am one of the characters. We spent so much times together that I know them as well as my friends. I get to see all their flaws and strength.

Being a flow writer, I draft roughly with a chapter outline about 2-3 pages. Then I add scene ideas or dialogue snippets, which most of the time I move around later. I don’t like detailed story outlines since they reveal too much of the story for me and I get bored with just writing it out. I’m always open to surprise myself when a character suddenly changes or a story takes a twist I didn’t anticipate while I outlining. Once I have finished the first draft, I make outlines that are more detailed and a storyboard for continuity.

Thanks to Hazel Hutchins, a great children author in Canmore, who shared her outlining idea with me in a writing course, I now do an excel table for quick reference. It is an excellent tool to see all the character in order of their importance and how often they show up in each chapter as well as what happens in the chapter. Also, you add a time line, chapter length, and interesting facts. This way you can find scenes that don’t quite fit faster and move them around.

Most of my ideas start out as a short story, but when I am about to finish them, my characters protest and want to tell me more. My first book Darinel Dragonhunter started as a Goodnight story for my friend’s son. He wanted a knight and fight tale, but I love dragons and a humorous story. Before I knew it the story developed into a full-length book after I introduced it to a writing course at the Banff Centre for the Arts.

I hope you found my writing story helpful and I could interest you in my book.

Here is a little teaser:

The prince sighed. “Yeah, you’re right. Do you mind if I take a break here?”

“Oh no. Be my guest,” the voice replied, cheerfully.

Darinel dismounted and reached to tie Tibor’s reins to the trunk of a tree, when a dark shadow swished over him. The horse bolted in panic and disappeared. Dumbfounded, he stared down the path they had just travelled.

“That was not supposed to happen.” Still shaking his head, he turned to a little sparkling stream at his feet and knelt beside it. He took off his helmet and splashed water onto his face and over his head.

“It is a bit inconvenient, isn’t it?” the voice said. “But don’t worry, the way down always seems faster,” it added cheerfully.

“Yeah, right!” the prince said with a smirk as he slid back to lean on a big boulder behind him. “Now you see I am no threat to you, won’t you come out and sit with me?” He ruffled his hand through his wet hair.

“I’d love to, but don’t you know, there’s a fierce dragon in these mountains?” the voice pointed out.

If you like to find out more about my book, you can visit me on my webpage:

Intrigued to read more? Here is the back cover text of my book:

Prince Darinel is traveling–for what feels like forever. Expelled from his father’s kingdom, he just wants to find a new home. When a shadow lures him to a wealthy kingdom, he stays to discover more about the darkness, but the citizens are tight-lipped.

Their king welcomes the foreign Prince hoping that he will solve his two problems: the dragon and his strong-willed daughter. Coming from a warrior kingdom, Darinel despises violence, but charmed by Princess Tuskja’s dare, he sets out to confront the beast. Instead of finding a fierce dragon, he finds a friend. The dragon’s malicious humor and his love of fairy tales entangle Darinel in a summer of adventures, while danger stirs in the East, the Dark Prince. Being refused by the Princess and humiliated by the dragon, this proud prince seeks revenge.

In compliance with the king’s decree, Darinel is torn between his friendship with the dragon and his love for Princess Tuskja, whom he can only marry if he kills his friend. Before he can make a decision, the kingdom is under attack. Now it is up to the dragon to either help his friend or respect his wish to not interfere.

If you like to buy my book, you can find it on the Museitup Publishing webpage:

or at these online stores:

Thank you for reading and feel free to sent me any questions you might have via my webpage. 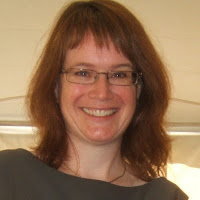 Born and raised in Germany, Antje Hergt came to explore the Canadian Rockies in Canmore, Alberta in 2003. Taking part in the Writing-with-Style Program at the Banff Centre for the Arts in 2007 encouraged her to follow her passion: writing for children. Darinel Dragonhunter is her first novel, which was inspired by her deep love for classic children literature and fairy tales. Her thrill for science fiction/fantasy movies and television shows had an outlet in various genre short stories. She is a member of the Alberta Writer’s Guild and graduated from the Justus-Liebig-University in Giessen with a degree in Modern Languages.

Currently, Antje still lives in Canmore with her snoring cat, Sally, and gets inspired by the magic of the Rocky Mountains. If she is not in Canmore, you can find her in Germany.