In "Bad Spelling," Kat's love interest, Andy, is a troll...sort of. Stolen at birth by the Trolless Gorm to replace one of her newborn triplets, Andy is through and through troll. He loves his brothers Endy and Indy, respects the troll King Ole, and is overall pretty happy being a troll.

The Samis of Siberia are primarily hunter/gatherers with fishing being a major food source. You can imagine that near the Arctic Circle, farming is not possible. Russia pulled the same dirty trick on the Samis as the US pulled on the indigenous tribes of North America: relocation. They moved them all next door to the Barents Sea, which, naturally, is not a desirable piece of real estate. I know we could all go on and on about the injustices of the world, but that's not what I'm doing here. I encourage you to follow the links from the Free Encyclopedia. It's an addictive trail of fascinating information.

The Samis practice shamanism with various shamans handling different parts of life.
This is very simplistic, and you won't have to try very hard to find differences in my interpretations of shamanistic matters with real-world examples. But, hey, I'm writing a fantasy here and am allowed to mess with all things magical to my heart's content. 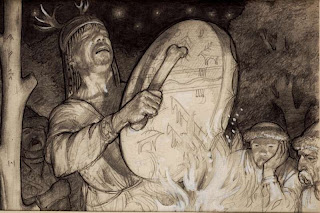 The Sambana jerked his eyes from the scrying flame with a curse. The little witch’s power amazed him. Calling the polar bear from its winter sleep sapped almost all of his energy. With great effort, he’d wakened it from sleep, ravenous from the deep hunger of hibernation. And then, as if it were of no moment, the witch called a full pod of Orcas!

When he had discovered Borisi frozen halfway between life and death, he had set the protective spell. Luckily, Borisi’s body was outside the witch wall, so he could keep watch. He felt it when the old witch discovered the spell. Now, this insolent child set out to stop it.

He had felt the village shield ripple. Someone went through the wall. He watched, recognizing the girl as Borisi’s child. The boy wasn’t of the people, so could be ignored. He muttered to himself and moved back from the flame. He needed to rest before he could try again to stop the witch from reaching the Mountain King’s lair.